Fancher Sarchet, the author of Murder and Mirth, wrote about the old Larimer County Courthouse of his day. As a lawyer, he spent a lot of time in the building, and he mentions it frequently with a fair bit of deference and nostalgia throughout his book. He included a somewhat lengthy description of the courthouse fairly early on in his memoir.

Today I simply want to reshare what Sarchet wrote about this venerable old building.

The old red brick courthouse in Fort Collins was built in the style of the architecture of the old public buildings of the British Isles. It was built in 1887 and still serves as a courthouse. It has a stone foundation extending five feet above the surface with a superstructure of red brick. There are the north, the east, and the south entrances with wide stone steps, which show the imprint of time. Two stories only are above the foundation besides an attic with dormer windows, the surrounding frames of which are filigreed. The roof is adorned with properly spaced cupolas interspersed with tall red brick chimneys and on the north side of the structure there extends and ornate tower of considerable height, the top of which supports a flagpole from which the flag of our country continuously flies in fair weather and in foul. 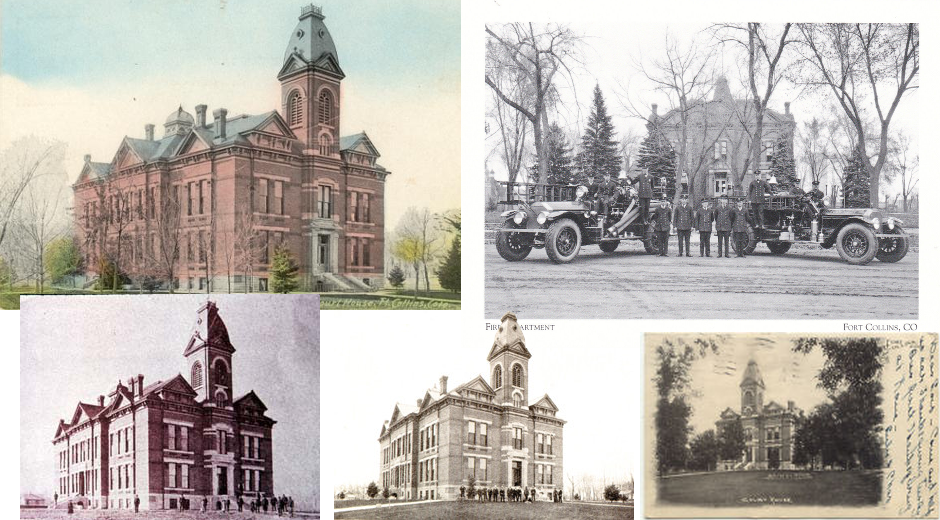 This old red brick courthouse stands in the center of the courthouse square, which is a city block adjacent to the main business portion of the town, and when it was built the founding fathers planted American elm, ash, hard, soft and Norway maple trees around the outer edge of the square, and on either side of the walks leading to the courthouse. Five spruce were planted around the south side. These trees have become a thing of beauty. The lawn surrounding the courthouse together with the flower beds which it supports are well kept, and the old building is covered with ivy.

The building which Fancher Sarchet described was the third courthouse in the county, the first being a log cabin in Laporte and second was Old Grout, which was located at Jefferson and Linden Streets. The red brick building that Sarchet describes was replaced in 1957 by a Modern (as in “Modern style of architecture”) building. In 2000, the Justice Center was built at the corner of Laporte and Mason and court cases are tried there. The Modern courthouse was torn down in 2003 and the new building on that block houses other county functions such as the county clerk and recorder, the motor vehicles office, the county commissioners offices, etc.

The county shows the various county courthouses and gives a brief history on their website.

The photos collaged together above are from CardCow and eBay where postcards are sold. The two on the lower left, however, were from the Fort Collins Archive.