The Pulliam Community Building in Loveland

In 1937, work began on the Loveland Community Building — the result of a public/private partnership between the town of Loveland, the Pulliam family, and the Works Progress Administration. The reinforced concrete building cost $150,000 to build, employed 180 workers, and when it was completed, it was large enough to seat a tenth of the population of Loveland in its spacious auditorium. Renamed in 1988 to honor the family that helped to make the building a reality, the Pulliam Community Building still stands at 545 Cleveland Avenue, an incredible resource for the people of the city. 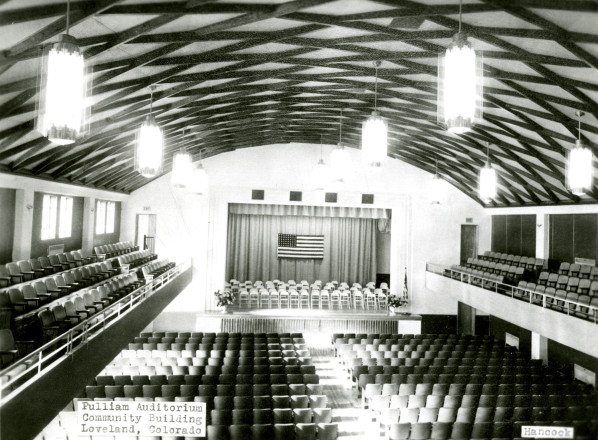 The Loveland (Pulliam) Community Building as it looked in the 1940s. (Photo from the Fort Collins Archive #Ha20129) 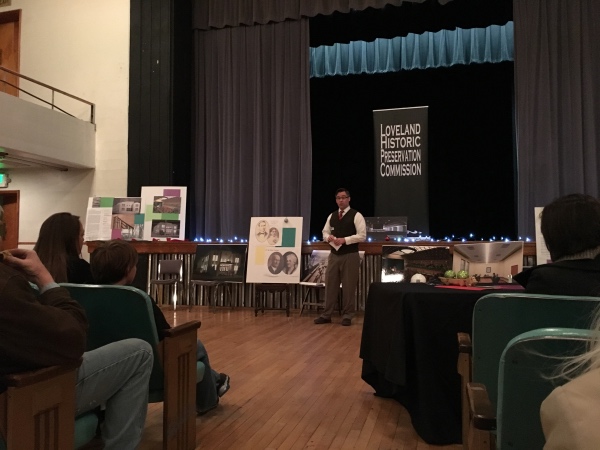 Jon-Mark Patterson speaks to the community members who attended the open house.

In addition to a tour of the building, and multiple displays giving the history of the structure, there was also a short presentation by Jon-Mark Patterson, the chair of the HPC and also the great-great-grandson of David and Lillian Pulliam. The Pulliams had donated the land for, and helped to fund, the construction of the community building in the late 1930s. Jon-Mark spoke to the history of the building — how it’s been used over the years — and also about some restrictions that the Pulliam family put on the property at the time of the original donation.

The building must be used for community purposes. There had originally also been a restriction that the auditorium seating could not be removed, but that requirement was eliminated last year after talks with family members who recognized that the bolted-in seating limits the uses of the auditorium. 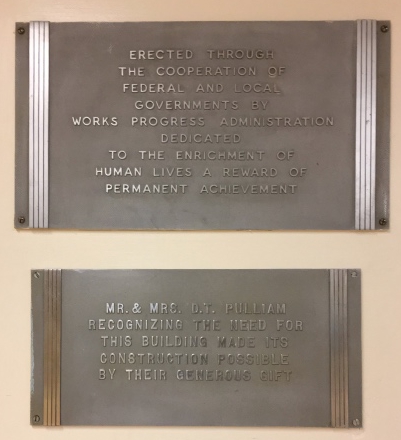 Signs located near the front entrance to the building.

Norm Rehme, President of the Pulliam Community Building Foundation, also spoke for a short time about the proposed changes to the building that would not only restore sections that are in need of repair, but that would also make it more useful for a larger variety of purposes including market-type events, large dances, and even rock concerts. (Loud concerts held at the Rialto could lead to falling plaster. But with 14 inch thick cement walls, the Pulliam Community Building can easily withstand a musical onslaught.) 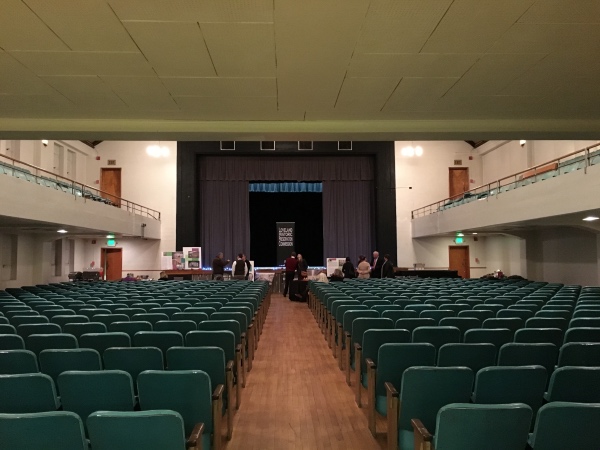 A view of the Pulliam building auditorium from the entrance to the room.

The auditorium seating will be removed and sold, with the money contributing to the restoration of the building. Though there is a large open space in the basement, it is blocked by pillars, making it less usable for some purposes. Removing the seats in the auditorium will create greater flexibility in the building, providing opportunities for a wider array of uses. 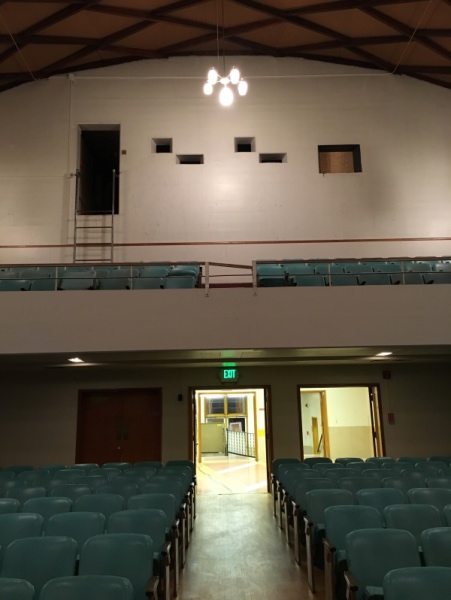 A view towards the projection room.

The upper level seating can not currently be used due to safety concerns. Upgrades to that area are included in renovation plans.

The entrance to the movie projector room requires climbing up a short ladder. 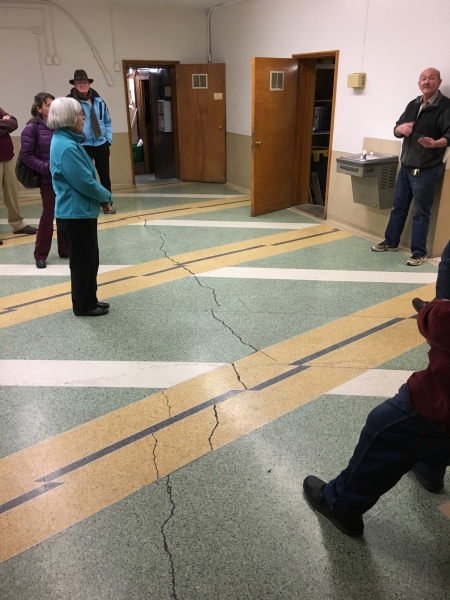 Touring the basement of the building.

Visitors received a tour of all three floors. Each level has its own coat-check room in addition to meeting rooms on the east end of the building. 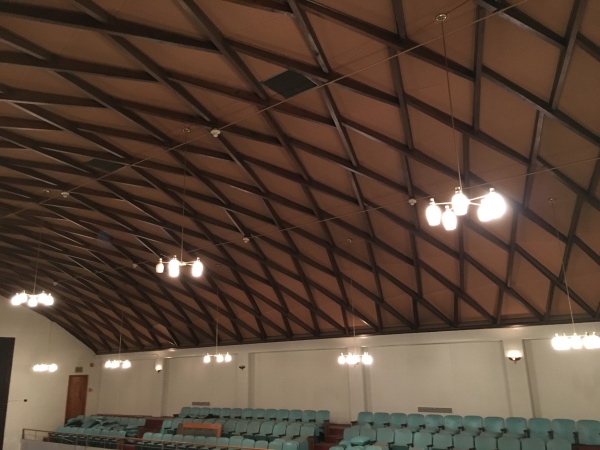 The auditorium has a vaulted roof made up of prefabricated timber segments. Insulation lies on top of that with the outer roof material laid directly on top of the insulation. This is called a lamella roof, a construction form that was patented in 1910 and which was popular between the World Wars. 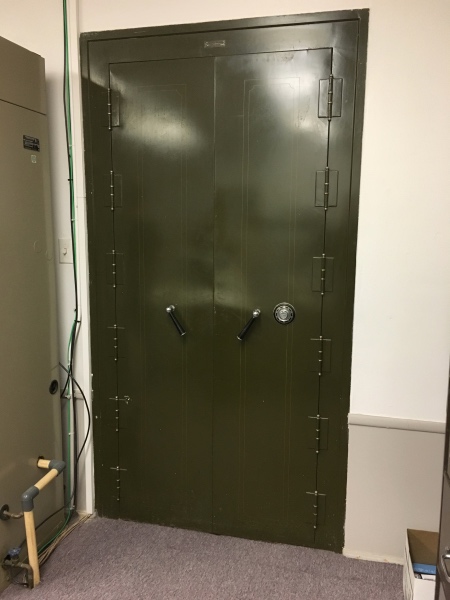 A safe in the building. 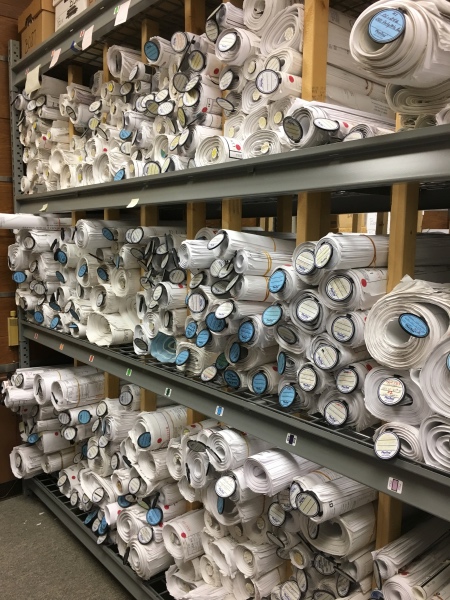 Speaking of documents…. The Pulliam Community Building is the repository for all of the building plans that the City has received. This is an incredible treasure trove and I’ve only captured one small section of it in the photo above. 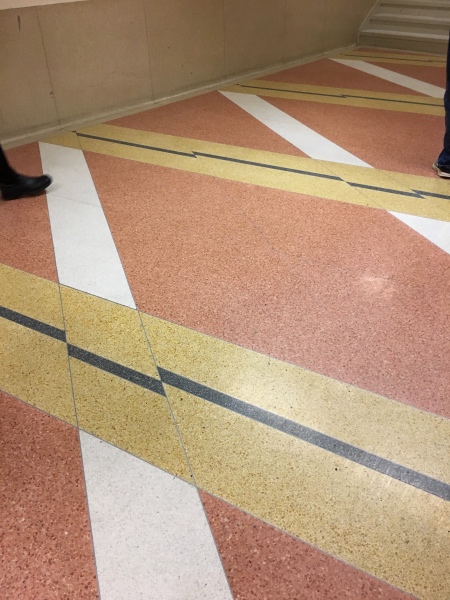 Each of the three levels of the building include a lobby area with terrazzo floors. Though the terrazzo on the bottom floor is cracked (see photo with green and yellow flooring above), the other two lobby areas are still in good shape as seen above. 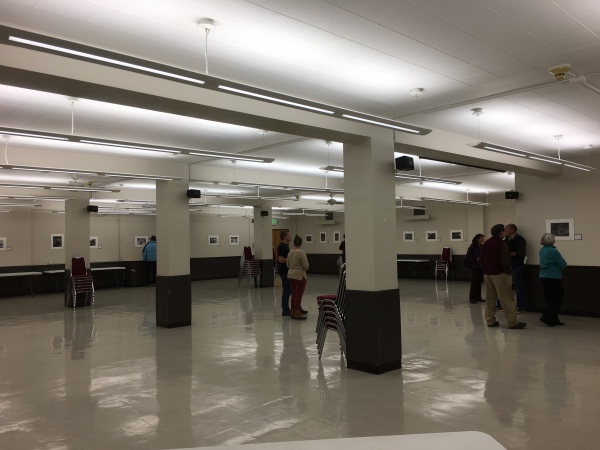 A large meeting area in the basement.

The basement of the Pulliam Community Building includes event room that has been used for dances, community dinners, and various other events. Currently displayed on the walls is a really wonderful mural project entitled, “A Portrait of Loveland Through Young Eyes.” Fourteen Loveland youths were given cameras and black & white film and tasked with creating “a gift for the future.” The images capture Loveland from the gritty to the beautiful. The collection is a real treasure and if you are able to see nothing else during a visit to the Pulliam building, viewing these images will still make your trip well worth it.

Main Street Catering leases space in the kitchen located behind this room.

The Stone Age Fair has been held in the Pulliam building every fall for the past 76 years, hosted by the Loveland Archaeological Society.

Much of the information regarding the history of the Pulliam building came from the placards on display and the tour that was given of the building.

Thank you to the Loveland Historic Preservation Commission for hosting this lovely event!