A short stretch of historic street car track was removed last week from N. Howes street. At one point the streetcar lines stretched from one end of the city to the other. There was even a route that took people far outside of town to Lindenmeier Lake. You could get pretty much anywhere you needed to go by trolley. But in 1951, with households increasingly having at least one, and sometimes two, automobiles, and the city stretching all the way down to Prospect Road, the trolley as a public transit system came to an end.

After the system had been shut down, one car was kept and placed next to the Pioneer Museum, which was located where the Old Town library is today. Over time it deteriorated. In 1977, volunteers began to restore the car.  By 1980, the Fort Collins Municipal Railway Society had organized and was talking about rebuilding the part of the track that ran along Mountain Avenue.

There was outrage and consternation from residents that lived along Mountain Avenue that the trolley would be noisy, would require the removal of all the trees through the center of the street, and would damage property values.

Carol Tunner was instrumental in the restoration of Birney Car #21 as well as securing donations for the restoration of the line. She and her cadre of faithful volunteers have run the street car on weekends throughout the summers for decades now. They also have been hard at work restoring Car #25.

Despite initial resistance to the running of the street car, residents of Old Town now find it a nostalgic amenity and Realtors often refer to it when listing a house along Mountain Avenue.

The small section of track that ran along N. Howes was the segment that carried the cars from the main lines to the car barn that still stands at the intersection of Cherry and Howes.

Although there has been talk as recently as last year about starting up the trolley line again, it’s very unlikely that will happen not only due to the costs of restoring or rebuilding the lines throughout town, but the BNSF Railroad is very unlikely to ever allow the electrical lines that the trolley runs on to cross over its tracks again. That would keep the railroad from being able to double stack cargo containers.

As roads are maintained and improved, we will likely continue to lose segments of the historic street car line that are still scattered throughout Old Town. And each time that happens, it’s a good time to think about Carol Tunner and her crew and to thank them for all the work they’ve done in restoring the heritage trolley, enabling us to relive a piece of Fort Collins’ history. 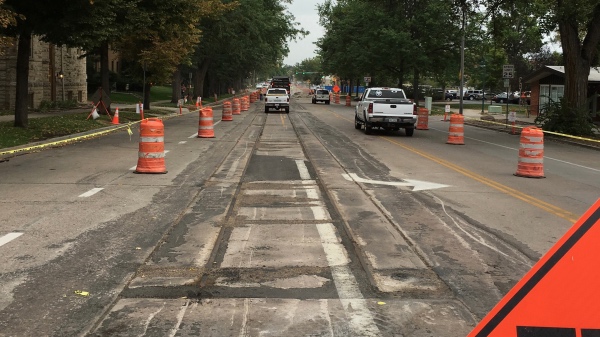 The beginning of work. The top layer of asphalt was removed. 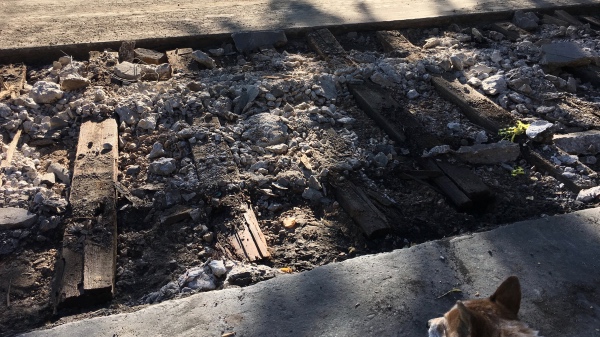 The railroad ties can be seen after more of the pavement had been scraped away. 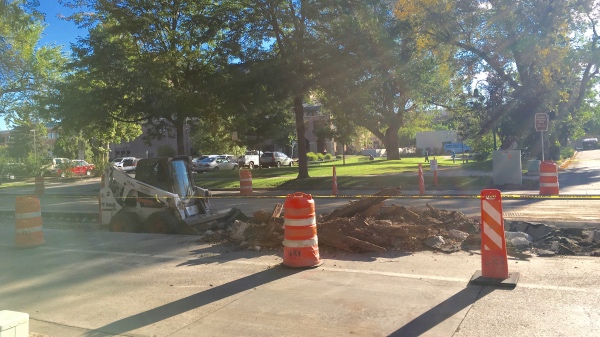 The ties were plowed up. 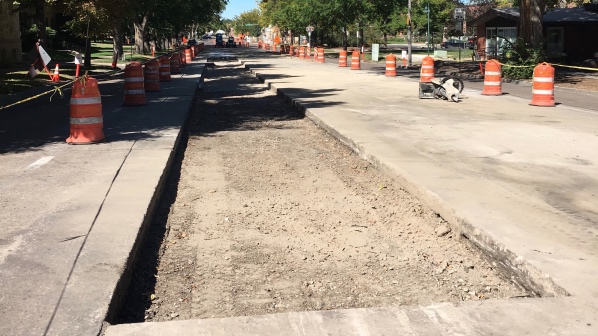 Once the tracks and ties were removed, the area was filled in with cement.

I found the map of the original street car lines on ThingLink. Unfortunately, there was no attribution given there as to where the image came from, nor who posted it to that site. It looks like the map was in a bound book. I tried to find a copy on the Fort Collins Archive site and was unable to, but I’d be willing to bet they have a physical copy somewhere among their books and things.