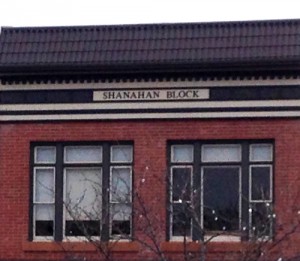 The Shanahan Block at 112 S. College

Happy Saint Paddy’s Day, Fort Collins! It seems appropriate that we look into the history of the Shanahan Block today, given that the building bears a beautifully Irish name. The Shanahan Block (or Building as we would refer to it today) is located at 112 S. College Avenue. You might know it best by the fact that the Starry Night Café is located in its lower level.

The building was erected in 1907 and first housed the Brinker Grocery, which prided itself on having the freshest fruit in town, top quality groceries, and a wide selection of meats and cheeses in its delicatessen. The notice of the store’s opening read:

New Business House Opened.
The Brinker Grocery company opened the doors of its fine ney [sic] establishment to the public last Saturday afternoon and handsomely entertained its visitors. There were cigars for the gentlemen, candy and carnations for the ladies, and delicious coffee for all who wished to partake. The Brinker Grocery company is housed in an elegant new building, carries a splendid stock of fresh new goods and is bound to get its share of Fort Collins’ growing trade. (Fort Collins Courier, June 19, 1907)

The store was run by Arthur Washington Brinker, who was an experienced grocer. But it was his sons, Orason Shackelton Brinker and Arthur Colorado Brinker, who took on the active management of the store as Arthur W was 63 years old at the time of the store’s opening.

Advertisement for the Brinker Grocery in the Fort Collins Courier on June 19, 1907

In January of 1920, the Brinkers sold their store to T. Robert Fortune. But just three months later, Fortune sold the business to William E. Kennedy in bankruptcy proceedings. By September of 1922, Brownie’s Sport Shop and Runge Music had moved in and shared the space. (Runge later took over the sport shop as well.) In 1936, the building became an auto parts store and such it remained until 1988.

The county assessors record from February 4, 1969, lists Bruce and Dorothy Keagy as the owners at that time. The building had also undergone some serious modernization by the time the county assessor’s photo was taken. (Someone in the assessors office added an arrow on the photograph so you couldn’t miss which building was being assessed.) 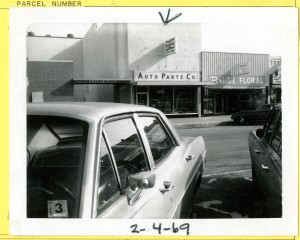 One of Fort Collins many “ghost signs” can just barely be seen along the north side of this building. Although it can hardly be read at this point, it was a sign for the auto parts store that was located here. 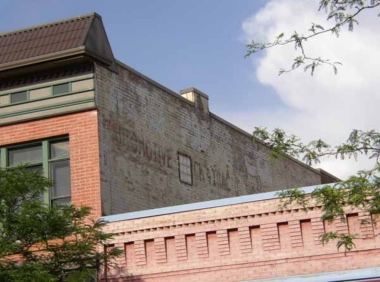 Ghost sign on the north side of the Shanahan building for the auto parts store that was there from 1936 – 1988.

By the early 1990s, the building was dilapidated and vacant. That’s when Michael Fangman came along and purchased the property. Michael had always liked old buildings. When he was a boy, growing up in Omaha, Nebraska, he and his friends used to explore old, vacant buildings near where he lived. Michael had moved to Fort Collins in 1979. Somehow despite the 1940s overlay of metal paneling, Michael knew there was a gem of a building underneath. He had the panels removed and the building restored to its original 1907 architecture (or as close as they could get based on old photos). 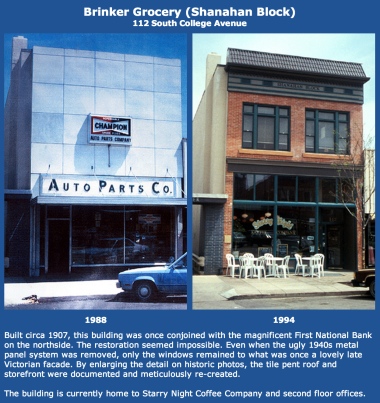 Shanahan Block remodeled in 1993. The photos and text were clipped wholesale from the Fort Collins Local Development Society web page. If the text is too small under the photos, it’s well worth clicking through to read what the FCLDS had to say about this project.

By this point you might be scratching your head and wondering why I haven’t explained who the Shanahans were that this building was named for. That, in itself, is a really interesting story. Buildings are generally named for their original owner. So I spent hours, along with Jayne down at the city’s Archive, digging through old city directories, articles on old groceries, and county assessor’s records trying to figure out who the Shanahans were. The only mention we were able to turn up was from the October 15, 1896 Fort Collins Courier. Michael P Shanahan had a letter at the post office that he’d failed to pick up. But there’s no other mention of the man anywhere (at least in Fort Collins). 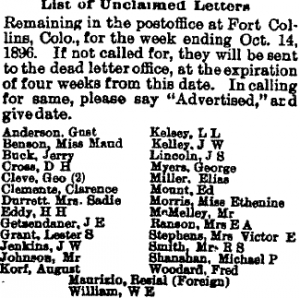 It wasn’t until I emailed Rob Wojtowick (aka Oscar DeSoto), the original owner of Starry Night Café, that I was tipped off to the origins of the Shanahan name.

When Michael Fangman renovated the building in 1993, he decided to honor his mother, who had passed away that year, by giving the building his mother’s maiden name – Shanahan.

Loretta Fangman was born in 1897 in Omaha, Nebraska to Michael and Catherine Shanahan. Though Michael and Catherine were born in the U.S., Michael’s parents were originally from County Kerry and Catherine’s parents were from County Cork in Ireland. Loretta and husband, Richard, had 8 children. Their three daughters all attended college and their five sons all became doctors. (The building’s owner, Michaelf Fangman, is a hematology-oncology doctor on the south side of town.) 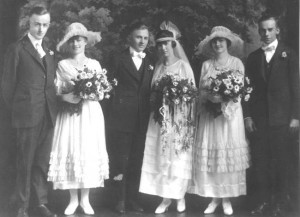 Richard and Loretta Fangman (center) at their wedding in 1919.

The restoration work that Dr. Fangman put into the Shanahan building is stunning – especially when you view the juxtaposition of photos that the FC Local Development Society put together. And it was kind of fun piecing together the mystery of who the building was named after. But two mysteries remain. Dr. Shanahan said that he believes there was a name on the building when they first went to renovate it, but he can’t remember what it was. I’ll have to keep digging to see if I can get to the bottom of that. And the second mystery has to do with two Michael Shanahans. Dr. Fangman’s grandpa was a Michael Patrick Shanahan of Omaha, Nebraska. But apparently there was a Michael P Shanahan that had at least planned on passing through Fort Collins in 1896 such that a letter had been sent here addressed to him. Is it possible that the two Michael P Shanahan’s were one in the same? We’ll probably never know.

The Brinker Grocery ad is from the Fort Collins Courier and was downloaded from the Colorado Historic Newspapers Collection.

Help in uncovering what business was located in the building and when came in part from Polk’s Fort Collins City Directory (1907, 1922, 1938) found through Ancestry.com, the Fort Collins History Connection website (for digital copies), and the Fort Collins Archive (for copies you could actually pick up and turn the pages in).

The information and photo from the county assessor’s records in 1969 came from the Fort Collins Archives and some incredibly helpful legwork by Jayne Hansen.

Dates on the auto parts store as well as the photo of the ghost sign on the side of the building came from a historic preservation document on the city’s ghost signs (pdf). (Thanks for the tip, Scott Montgomery.)

Information on Dr. Michael Fangman and his family came from a phone conversation that I had with him on March 14, 2014.

Information on, and photo of, Loretta Shanahan Fangman came from a memorial page created by a family member and from Ancestry.com.