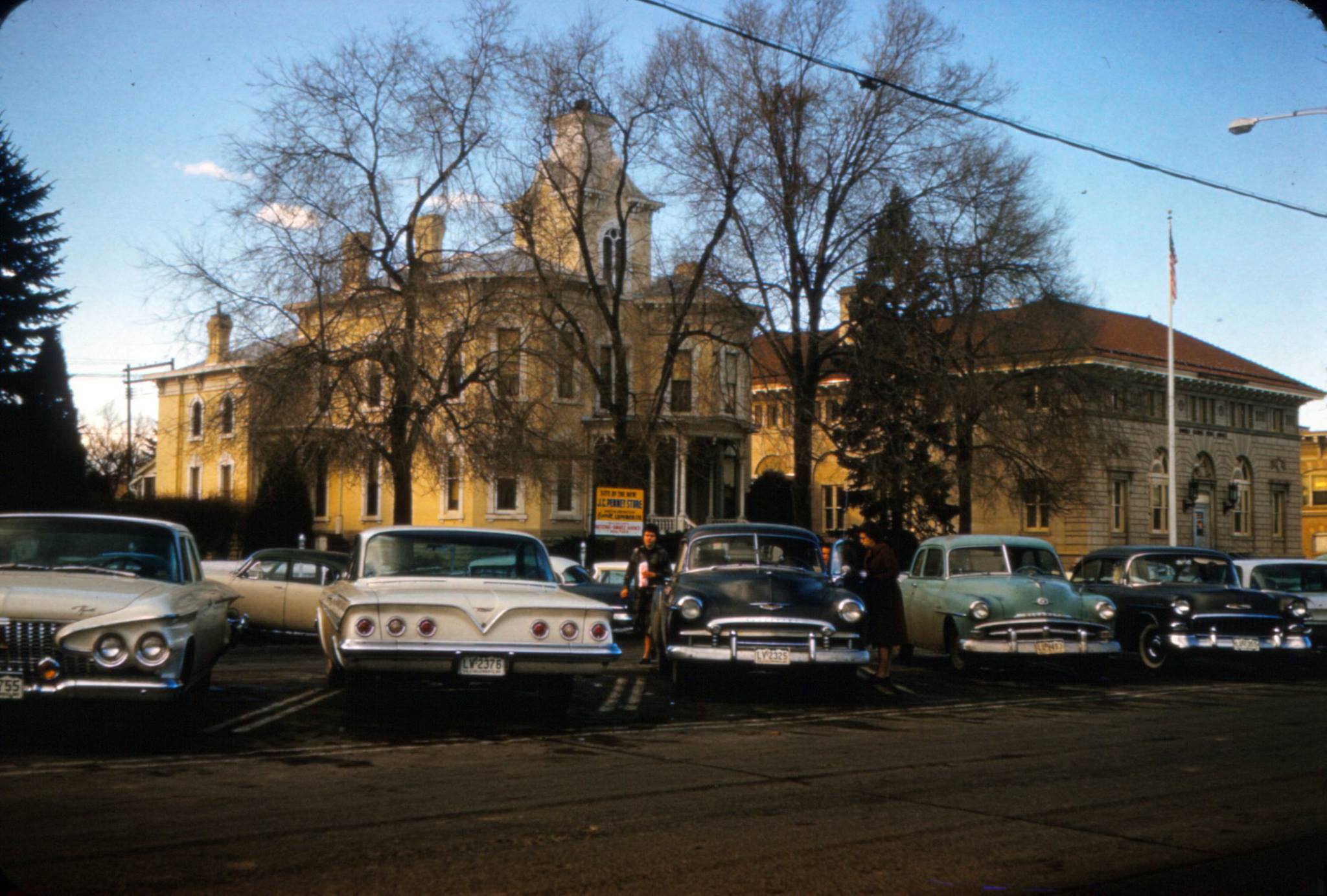 The B.F. Hottel House at 215 S. College used to stand just south of the old Post Office building (now the Fort Collins Museum of Art). It was demolished in 1962. (Photo courtesy of Jim Burrill.)

In the 1960s and 70s, Fort Collins was going through a time of rapid growth and change. In addition to building out the farm land to the west and south of town, there was also a strong push to raze old buildings and replace them with either new structures or with parking lots. When the original city was laid out, most people walked or rode a horse or buggy to get around town. There wasn’t a need for large expanses of parking. But with the advent of the car culture, which included urban sprawl, more and more people were driving to get to the businesses downtown, which meant more parking was required. 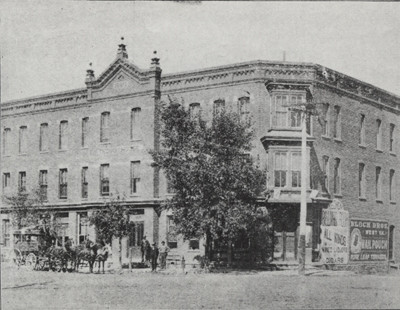 Razing old buildings was nothing new. When the Union Pacific Railway came to town, several buildings along Riverside were either moved or pulled down. The only structure from the days of the original fort that is still in existence today is Auntie Stone’s cabin, which was originally moved and repurposed (a couple of times), and eventually located in the museum complex at Library Park. 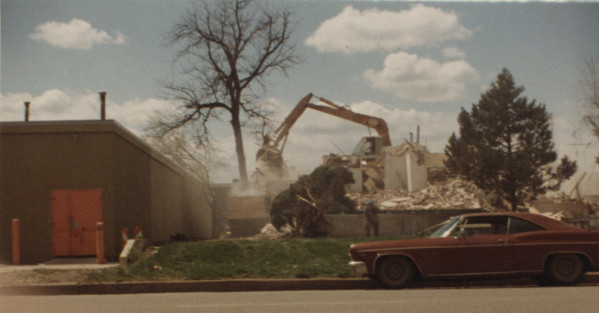 Demolition of the Loomis House. The building to the left is was the Colony Market, which also met the wrecking ball when it was replaced by Safeway.  See a photo of the Loomis house from 1886 in the last Forgotten Fort Collins post. The house was torn down in 1980. (Photo courtesy of the Fort Collins Archive.)

But when the buildings started going down in the 1960s and 70s, it was a bit of a shock to many long time members of the community, who had grown quite used to the city as it was. It had remained largely the same due to the slow expansion brought about by two world wars and the Depression. What growth there was tended to fill in areas around the Fort Collins High School building (on Remington) and vacant lots that still remained around other parts of town. Though the rampant growth in the 60s and 70s wasn’t unprecedented (There had been a huge growth spurt between 1900 and 1910.), the previous growth spurt had taken place before most of the population at the time had even been born. 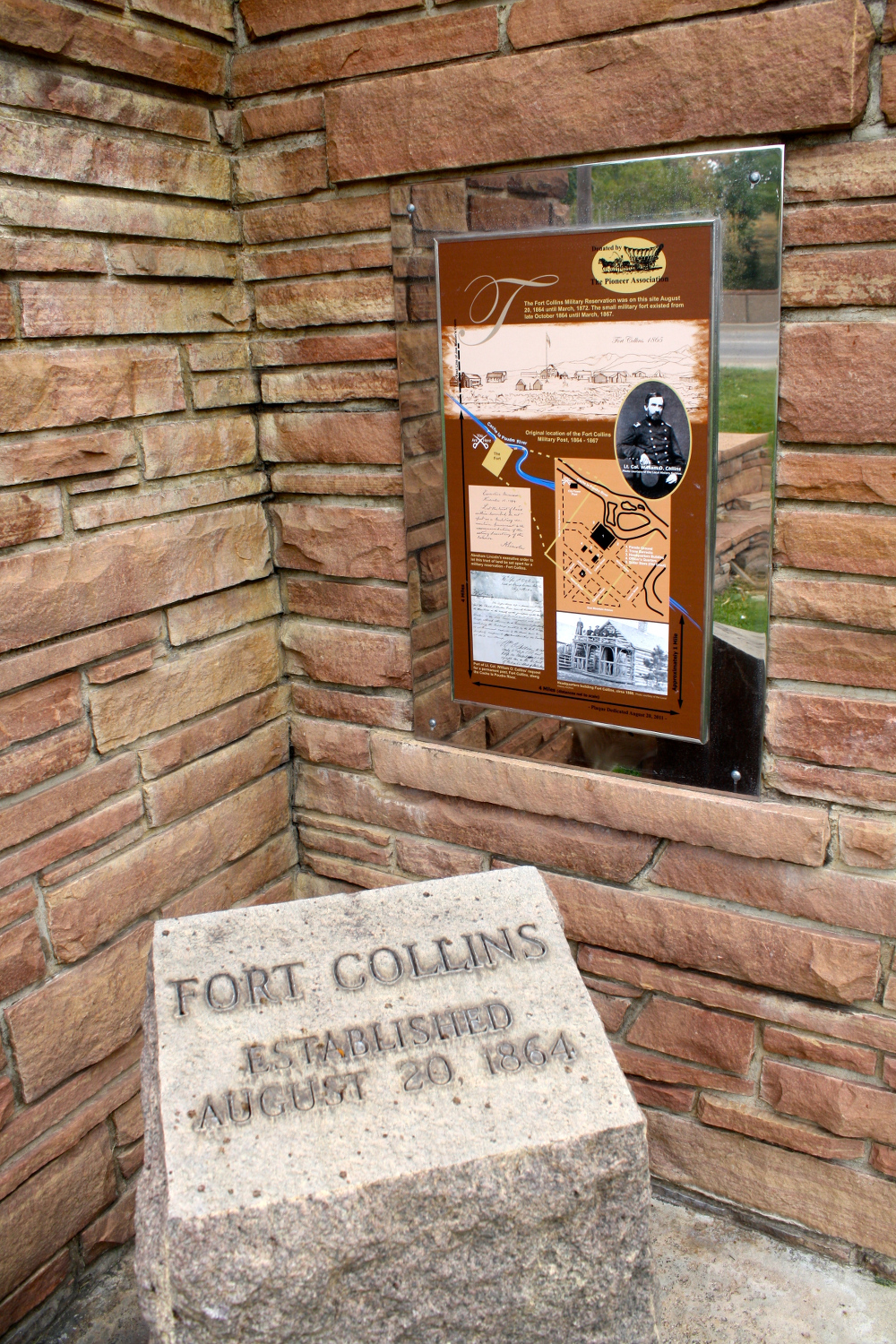 This stone monument was meant to indicate the original site of the old fort… except that it was placed in the wrong location. The newer interpretive sign behind it explains where the fort was really located. This monument is near the Powerhouse Energy Campus, which is on the southeast corner of College Avenue and the Poudre River.

This period of rapid growth and change led to an outcry among long term Fort Collins residents as well as from some relative newcomers who recognized the beauty and importance of the architecture and history that was being lost. The public expressed their concerns to city council which responded on June 15, 1968 by creating a Landmark Preservation Commission.

“The newly appointed commission began an enthusiastic search for possible landmark structures and sites. An inventory was developed, and most of the identified locations were toured by the group. The first designation missed the mark slightly. City Council adopted a resolution on November 13, 1969, giving landmark status to the old city dump as the original fort site. The actual fort had stood adjacent to the later dump. Other landmark declarations which came later were more in keeping with the spirit of the ordinance.” 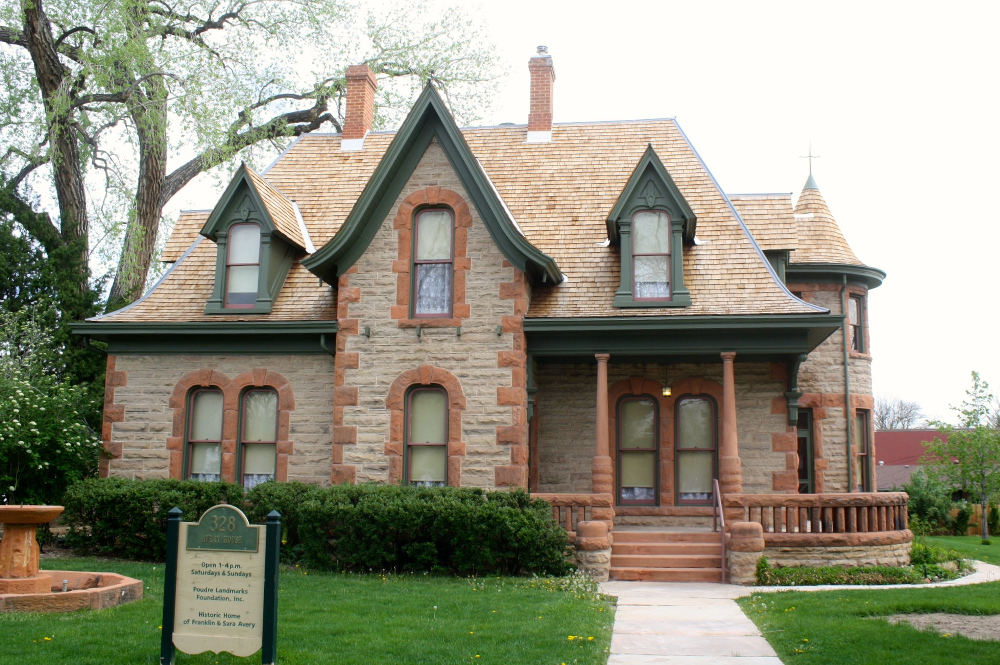 Franklin Avery laid out the streets and lots of early Fort Collins. He lived in this house until the early 1900s. The city bought the house for $76,000 and turned it into a museum.

The old city waterworks building was designated two years later, and the Avery house soon after that. Both of these properties were purchased by the city and are now cared for by the Poudre Landmarks Foundation which also offers regular tours of both properties.

Two more properties were landmarked through the efforts of the LPC — the Nelson Milkhouse (at the corner of Swallow and Lemay) and Linden Hotel (where Nature’s Own is located). Then, in 1975, the city council combined the board of the history museum with the Landmark Preservation Commission to create a new entity — the Cultural Resources Board — which continued the work of landmarking properties for preservation. 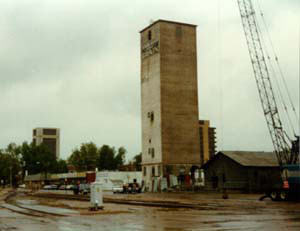 Strang elevator was located along Mason Street. It came down in the 1980s. You can see the Key Bank building in the background. (Photo courtesy of the Fort Collins Archive.)

The Baby Boom that followed World War II was at the forefront of an unprecedented growth in worldwide population that has dramatically changed the physical landscape across the globe. The proliferation of automobiles and decades of cheap gasoline lead to sprawl as well as the destruction of older buildings, in order to make way for parking lots and widened roads. 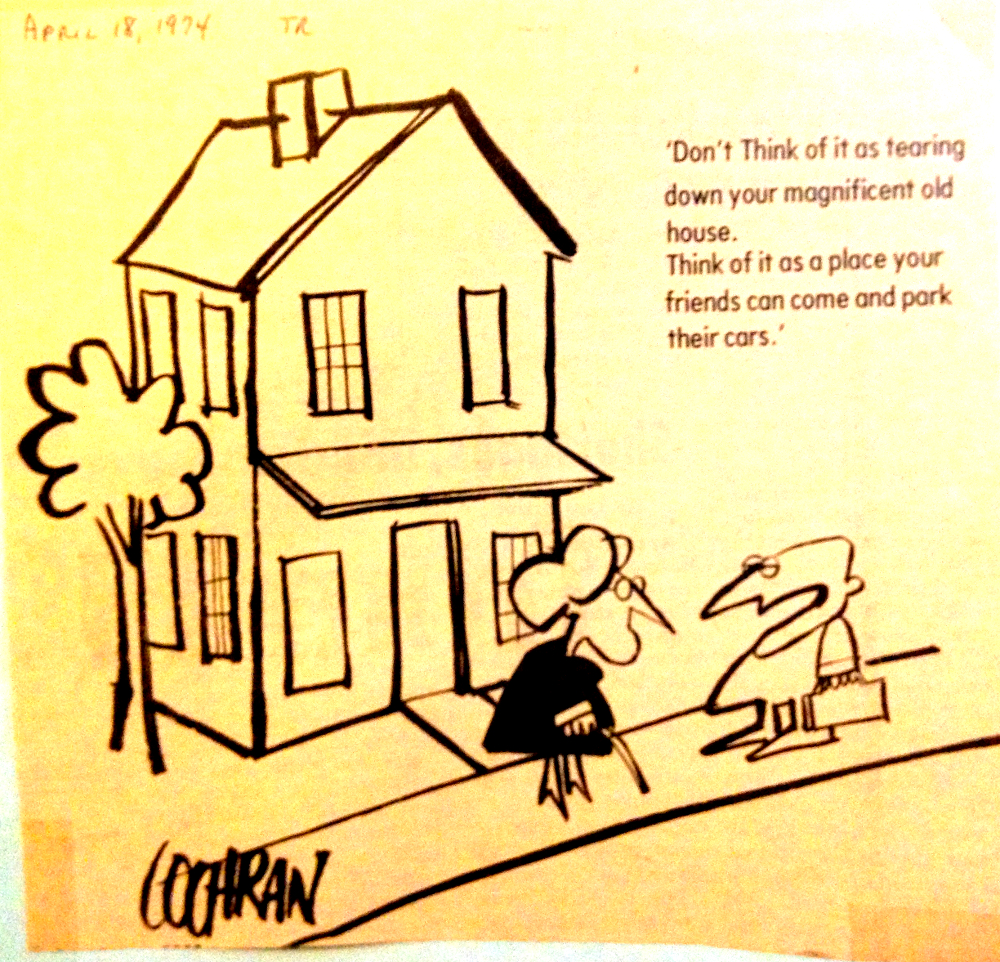 This comic was cut out of the Triangle Review and saved by Wayne Sundberg in 1974.

Historic preservation has evolved over time. The movement began in reaction to, as Wayne Sundberg calls it, the “wrecking ball of progress.” But as the results of past preservation efforts have been subjected to scrutiny over the years, positive outcomes beyond simply saving the old and familiar are starting to come to light. Of particular interest are the economic benefits that come from preservation. Fort Collins has realized quite a bit of this not only in terms of the number of local craftsman that have been employed through the maintenance and restoration of these older buildings, but also through the heritage tourism that our landmarked Old Town Historic District draws. Owners of landmarked properties bring money into the city through grants and tax credits. There’s even a burgeoning movement to preserve old structures for the environmental and sustainability benefits that reusing the buildings provides (as opposed to throwing old materials into the landfill and using all new natural resources to construct a new building).

I’m thankful to all of the people who came before me and who made a contribution towards the preservation of the historic buildings that we still have in Fort Collins. Even before I became interested in the stories of the people who built this city, I was captivated by the variety and craftsmanship of the buildings they left behind. I believe there’s a lot of value in knowing our history as a community. I recognize that history is easily overlooked. It is easy to ignore the museum or not read the history books. But we live and walk among buildings every day. Though we may take them for granted, they still shape our lives and our movements in a way that speaks to us of their past.

The field of historic preservation is changing. It’s no longer a reactionary movement. It is becoming a powerful tool that can be wielded by municipalities to create vibrant and sustainable communities.

Many dates and data points were taken from a notebook that Wayne Sundberg loaned to me entitled The Wrecking Ball of Progress: Historic Preservation Efforts in Fort Collins. August, 1977. There is a short movie by the same name and also by Wayne Sundberg that is available for checkout through the public library.

Thanks to Karl Rinne who corrected my mistake that the Safeway building was next to the Loomis House when it was torn down. The Colony Market was there before the Safeway.

All uncredited photos were taken by me.