How the Klan Took over Colorado

The Ku Klux Klan has had three major waves of activity in the United States. It was during the second wave, in the mid-1920s, that the Klan swept Colorado — building up the second largest membership in the Union and taking control of the state government. How did the Klan pull it off? Why did people that we otherwise might have thought of as fine Coloradans pull on the white robe and hood? How did some people become convinced that fiery crosses and family values could be connected?

The answer is strategic marketing,… built on a foundation of fear, racism, anti-Catholicism, anti-Semitism, and anti-immigrationism.

It was the beginning of the Culture Wars in Colorado.

Start at the Top

John Galen Locke was a surgeon. He also became the Exalted Cyclops of the Colorado Klan.

When the Klan came to Colorado in 1921, it started building up its ranks first within the upper echelon of society — business owners, architects, bankers, teachers, doctors, clergy, etc. These early-adopters were then made leaders and sent out to invite their family members and friends. Many were also part of fraternal organizations such as the Masons, or members of a local church. They used such connections as another avenue of recruiting new members.

You are more likely to become a member of an organization if someone that you respect, or think highly of, asks you to join. Being asked by someone that is beneath you on the social ladder wouldn’t have the same impact. So by first pursuing respected members of the community to join the Klan, it made it easier to then pull in their family members, friends, and acquaintances who might otherwise have been hesitant to join an organization that a few decades earlier had been connected to mob violence and lynchings.

The strategy of first approaching upper class residents and working down the social ladder from there was used in communities throughout Colorado. One of the only cities to buck this trend was Colorado Springs. When the Klan approached the editor of the newspaper and the chief of police, two positions that they quickly wanted to pull into their organization in order to get both favorable news coverage and police support, they were rebuffed. The Colorado Springs Klan grew to about 2,000 members, but that was far below the numbers in other communities.

Of course, when possible, the kleagles (Klan recruiters) would get ahold of the membership lists from organizations where they knew they could find people of like-mind. The anti-Catholic American Protective Organization was one such group. They also approached people who they knew were already members of other fraternal organizations, such as the Masons. Newspapers reported that Masonic leaders were warning their members to steer clear of this threat.

Fly Under the Radar Except for Random Acts of Kindness

When the Klan first came to a new community, it remained on the down-low until it had already accrued a significant number of members. Often, the public’s first realization that the Klan was in their midst would come in the form of a charitable donation to a church or some other local Christian organization, such as the YMCA.

Old newspapers are full of stories of a congregation in the middle of a Sunday service when suddenly a few Klan members (usually around 5 or 6) in full robes and hoods, would enter the building, walk silently to the front, hand an envelope to the pastor, and then walk right back out. The envelope would contain a check for $50 or $100 along with a note that said something along the lines of, “For your service to the community, we thank you.”

Though there were stories in the newspapers of Klan activities in other states that were not so benign, for Coloradans the Klan appeared to be a calm, thoughtful, and community-supporting organization that was willing to put its money where its mouth was. For anyone with anti-Catholic, anti-semitic, anti-immigrant, or anti-Black attitudes, but who wanted no part in a violent organization, suddenly the Klan was starting to look like a “reasonable” person’s (hate) group.

Though there was a national organization that all realms (the Klan at the state level) reported to, there was a tremendous amount of autonomy allowed. The Colorado Klan didn’t necessarily look and feel like the Alabama Klan or the California Klan. And even within the state, one klavern (local Klan chapter) might develop differently than another. The most effective leaders, and the fastest growing klaverns, honed in on what residents feared the most. This generally revolved around a lack of police enforcement (allowing bootleggers and prostitutes to ply their wares), changing morals in the younger generation (who were spending time with each other in parked cars along the road), and a push by minority populations into previously all-White communities and institutions.

On the Western Slope, however, these things really didn’t seem to apply. Instead it was the thrill of joining a secret movement and excitement of being a part of a fraternal lodge that drew members in. Beer was served at Klan meetings Grand Junction while klaverns throughout the rest of Colorado were strongly in favor of Prohibition. And one Grand Junction Klansman even married a Catholic women without anyone batting an eyelash. The Western Slope Klan members appeared to enjoy the cloakings of the Klan without really taking to heart any of the deeper meanings, messages, or goals of the organization. 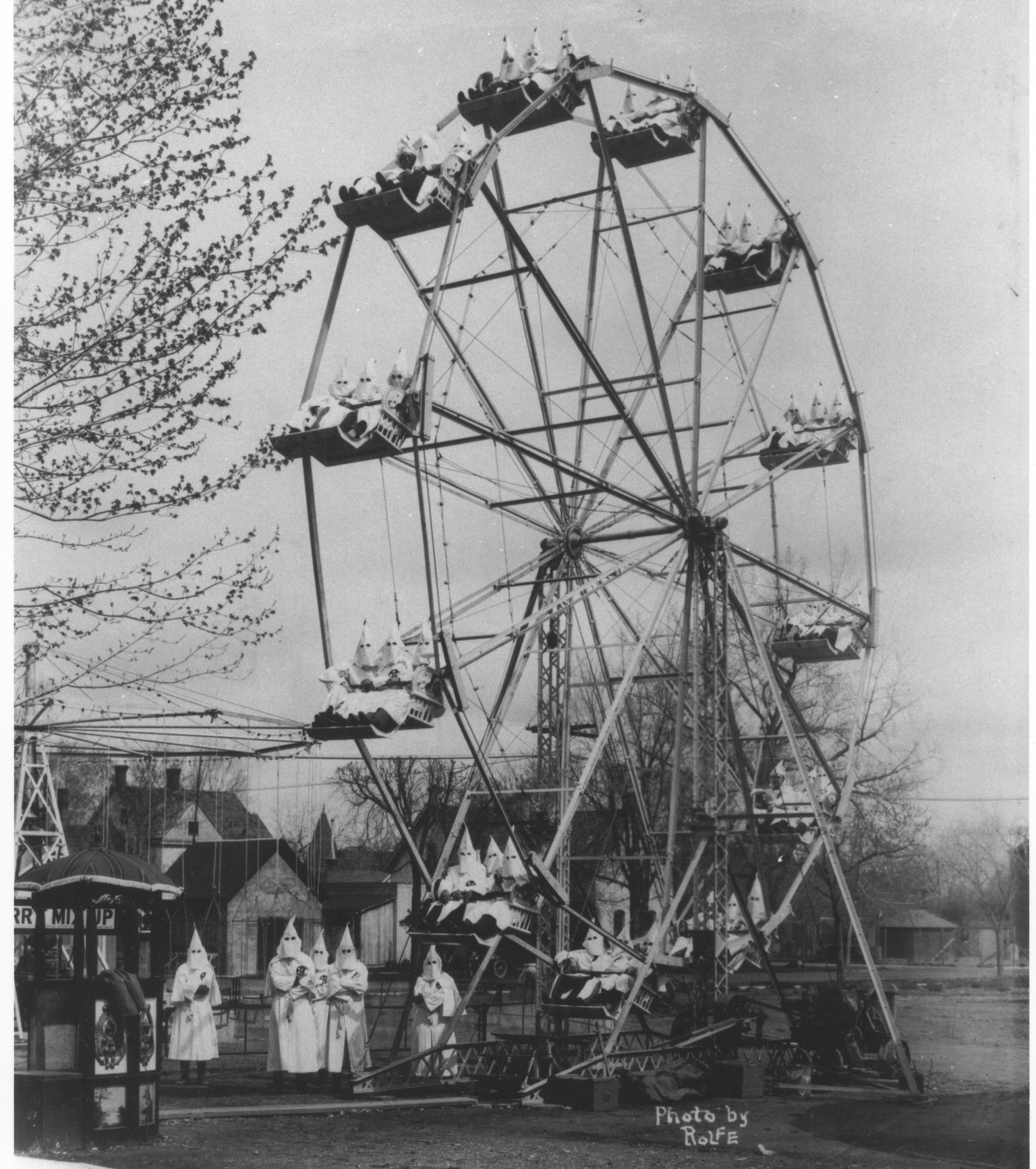 If your message is all about how “those bad guys” are going to harm your family, then elevating the importance of family helps to strengthen your message. The Klan did exactly that by providing family-friendly picnics, carnivals, and other events. It was an opportunity to provide good-wholesome fun for all (White Protestants), but it also reduced roadblocks to membership. How could anyone think you’re a terrorist organization when you give out free rides on a Ferris Wheel, right?

Add Purpose and an End Goal

The Klan became most visible when, in 1923, it got Benjamin Stapleton elected as mayor of Denver, and then in 1924, when it swept the state, getting Klan members elected to the U. S. Senate, Colorado Senate and House, to the position of governor, and many other elected roles all the way down to school boards. It was during this time that the stealth mode of operating was thrown out the window and playing upon the fears of residents became especially important.

And if the fear of a____(Fill in your minority of choice from the following list: Catholic, Italian, Jew, Mexican or Black person)___ deflowering your daughter in a parked car or leading your son into drunken revelries wasn’t enough to coerce you into the Klan, then the threat of losing your job was called into play. All along the Front Range, employers threatened to fire employees who hadn’t joined the Klan, and they handed out Klan membership forms at interviews for potential new employees. If you wanted a job, then you joined up.

It was during pre-election membership drives that blue collar workers were pulled into the organization. At that point, it wasn’t about keeping out the riff raff any more. It was all about bringing in the numbers in order to storm the polls, which they did in a big way.

…with the exception of Indiana, there was no bigger or brighter star in the Klan flag than Colorado. – L. C. Speers. New York Times. September 26, 1926 (as quoted in Robert Alan Goldberg’s book, Hooded Empire.)

The Klan preached a message that the White Protestant population in Colorado wanted to hear. And they did it in a way that felt family-friendly and “100% American.” With shrewd planning and crafted messaging, the Ku Klux Klan took over the state in the mid-1920s. But marketing alone was not enough to hold onto that power. By 1926, the Klan was already on its way out. But the demise of the Klan did not mean the demise of racism and hatred. That has continued on in Colorado to this day, no white cloaks needed.