The Sanborn Map & Publishing Company has produced, over the years, several detailed maps of cities and towns. After creating these maps, they would sell copies to local insurance brokers who would use them to determine pricing for insuring buildings based on the use of the building, the materials it was made out of, and special features (like the spire on a church).

The first Sanborn map of Fort Collins was drawn up in 1886. Split into four pages, the map covers the bulk of the city at the time. Page one included an index, the Agricultural College, and the southeast end of town. You can see both the first page of the map and the buildings from those areas that still remain today in the post entitled, “These buildings remain: Sanborn Map (1886) page 1.” 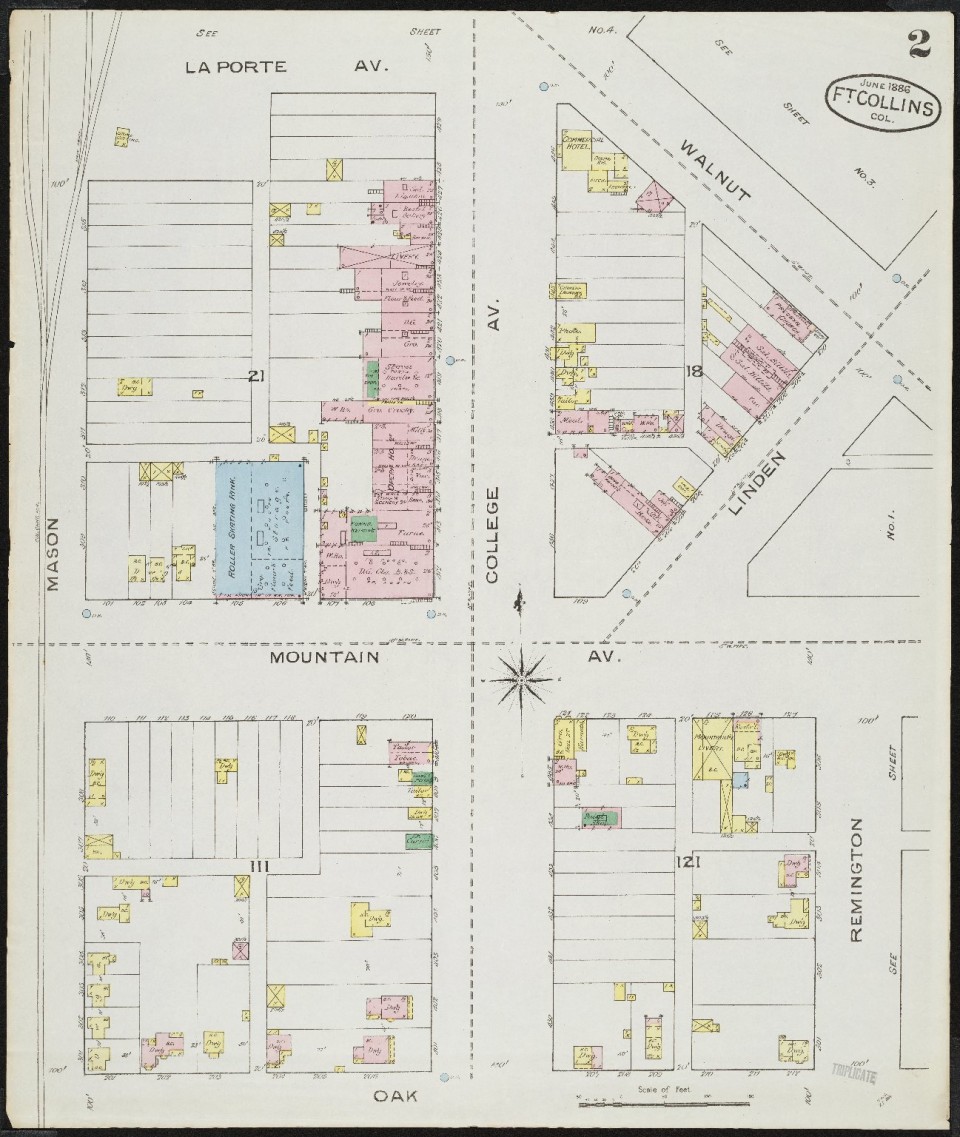 Page 2 covers much more of what we think of today as “Old Town.” Ironically, it barely covers the area of Fort Collins that was thought of as “Old Town” in 1886 — namely the area along Linden between Jefferson and Walnut. 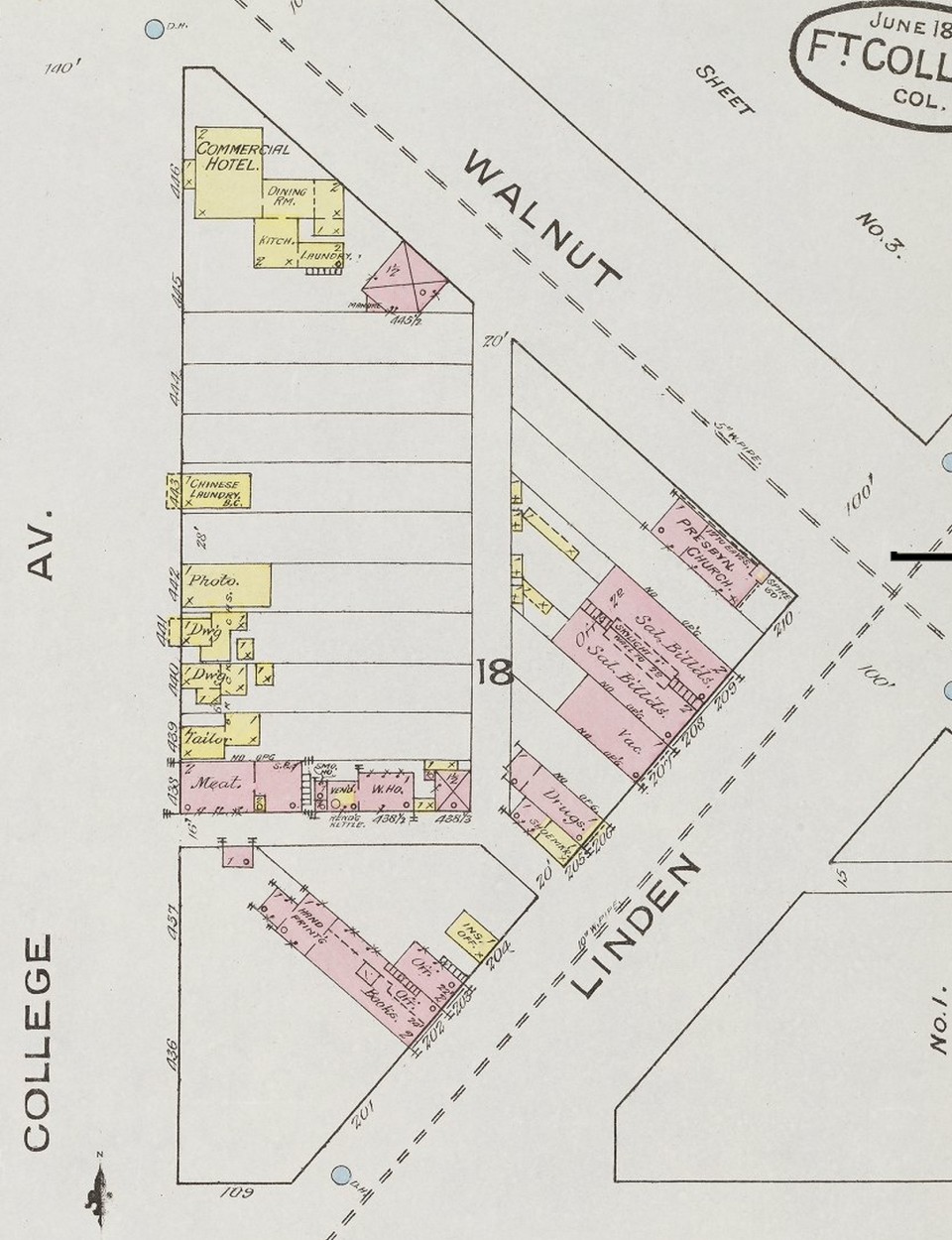 The upper right section of the map on page 2 includes the triangular area bounded by College, Mountain, Linden, and Walnut Streets. 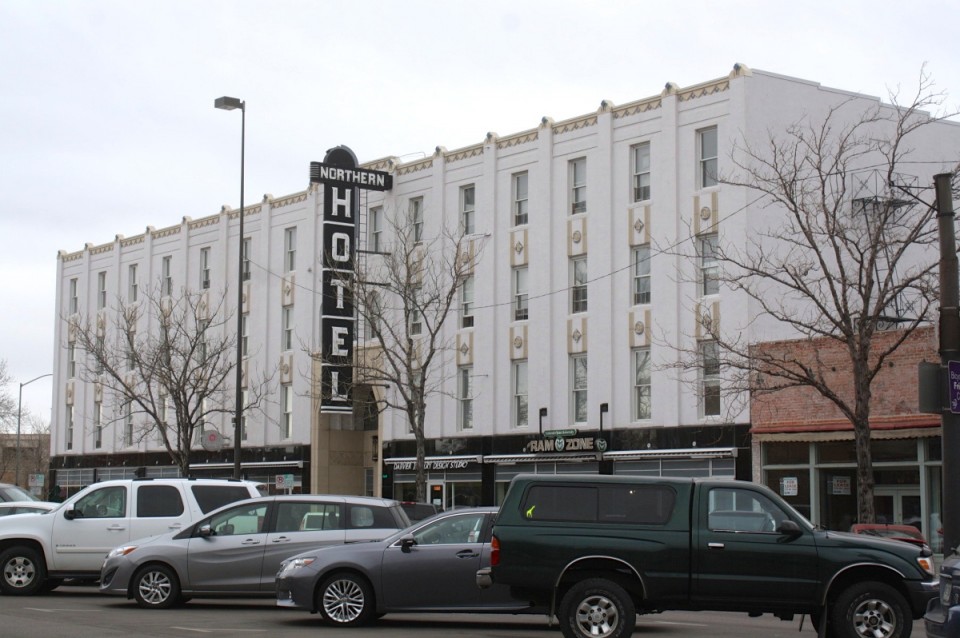 At the top of the map you’ll note the Commercial Hotel. It was built in 1873 at the corner of Mountain Avenue and Mason. In 1877, with a new train line through town, the hotel was moved to the corner of Walnut and College in order to capture business from those disembarking at the train station north of Laporte at Mason. Though originally referred to as the Agricultural Hotel, some time before the 1886 Sanborn map was drawn, it was renamed to the Commercial Hotel. In 1904, a group of businessmen purchased the hotel and extensively remodeled it, retaining some internal features but utterly changing the facade. In 1936, it was remodeled again and given the Art Deco exterior that we know today. 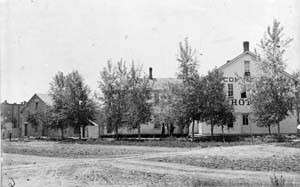 Here’s a photograph of what the hotel looked like when the Sanborn map was drawn. (From the Fort Collins Archive – H09708.)

It’s definitely a stretch to say that the Northern Hotel is the same building that was in the 1886 Sanborn map, as this photo from 1880 shows. Wow! What a difference! 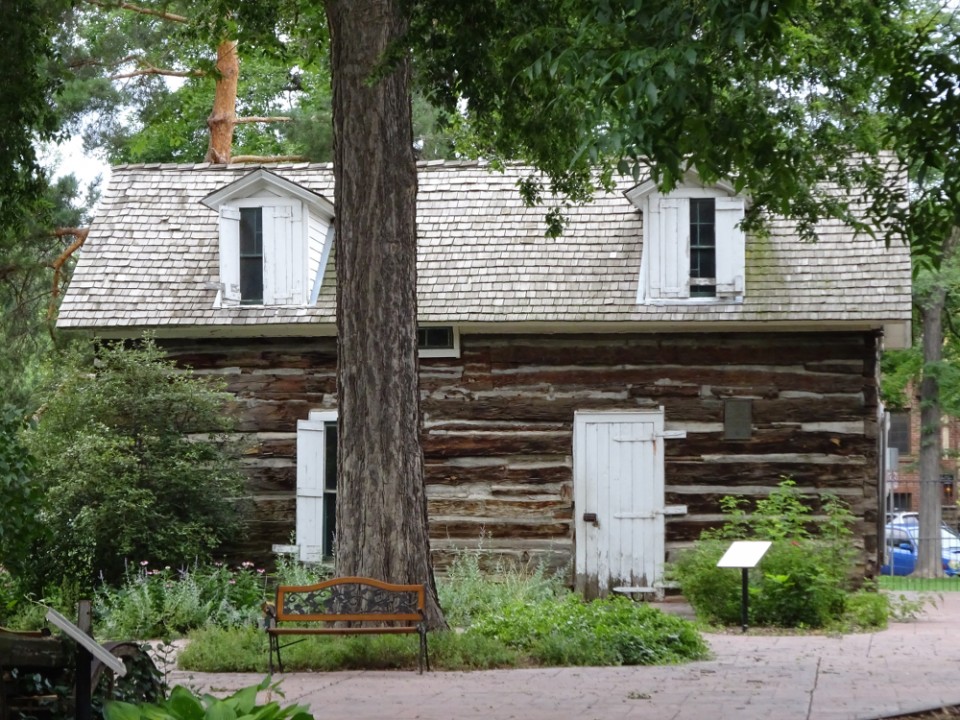 Auntie Stone’s cabin in Heritage Park at the corner of Olive and Mathews. The original front is now the back and vice versa (according to Wayne Sundberg).

Behind the hotel you’ll note a dining room, kitchen and laundry. The laundry building is also still with us today, but it’s been moved to Heritage park (next to the old Carnegie Library which used to house the Fort Collins History Museum). The laundry building used to be Auntie Stone’s cabin. It had been moved from it’s location near Jefferson to stand behind the Agricultural Hotel when it stood on Mountain Avenue. When the hotel was moved, the cabin was moved along with it. It had another stint on Mason near Oak Street before coming to it’s final resting place by the old museum. 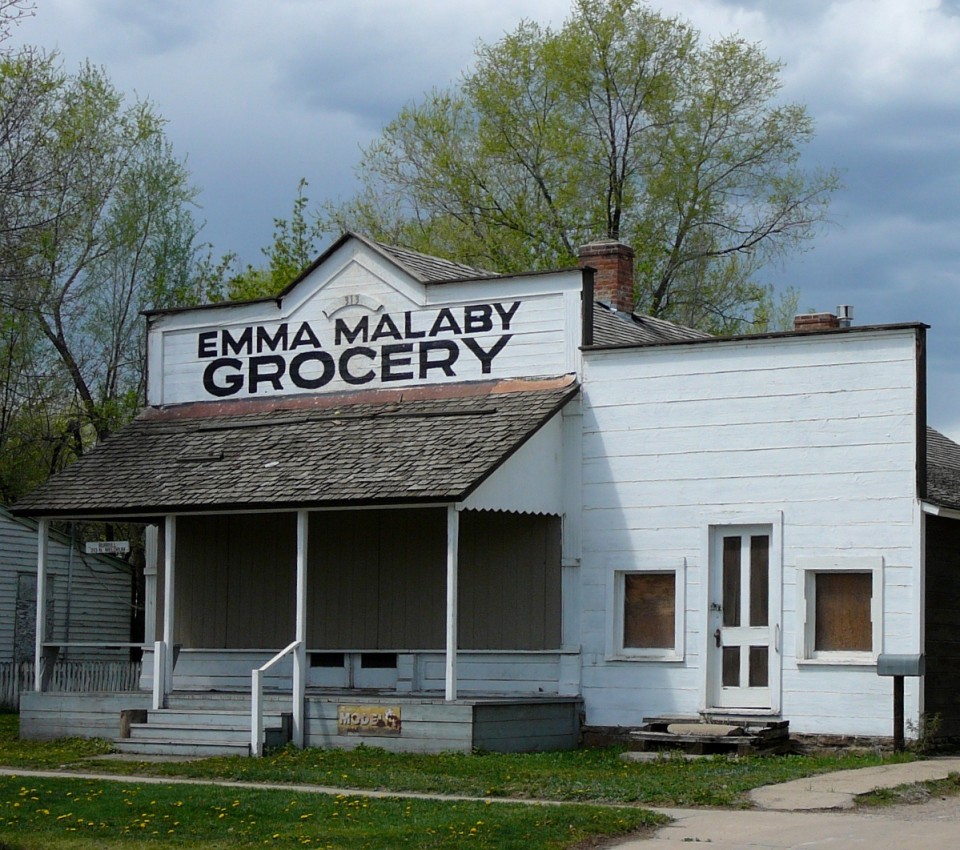 As you move south down the map, past the Chinese laundry, you’ll note a building labeled “Photo.” This wooden storefront apparently housed a photography studio in 1886. Around 1904/5, the building was sold to Frank Collamer who set it up on rollers and over the period of a year, slowly rolled the building to his property on N. Meldrum, near Maple. There he set the store on a lot and opened up the Collamer Grocery. It later was run by his daughter, who had married a Malaby, and it still stands at 313 N. Meldrum today.

The Commercial Bank and Trust building replaced the Collamer grocery at 146 N. College. The difference between the two buildings — one made of wood and one of stone —  reflects the improving fortunes of early Fort Collins residents as well as their desire to have buildings that felt more substantial and permanent.

I had assumed that the building labeled “Meat,” just south of the photography building by a few lots, was the building that currently houses Wagz Pet Bowtique & Barkery. But according to the county assessor’s records, that building wasn’t constructed until 1905… which makes me suspect there’s a story there. But that will have to wait for another day.

So now we’ll hop over to Linden Street. The Presbyterian Church at the corner of Linden and Walnut is long gone. (The Right Card is there today.) But the next building to the south on the map is still with us. 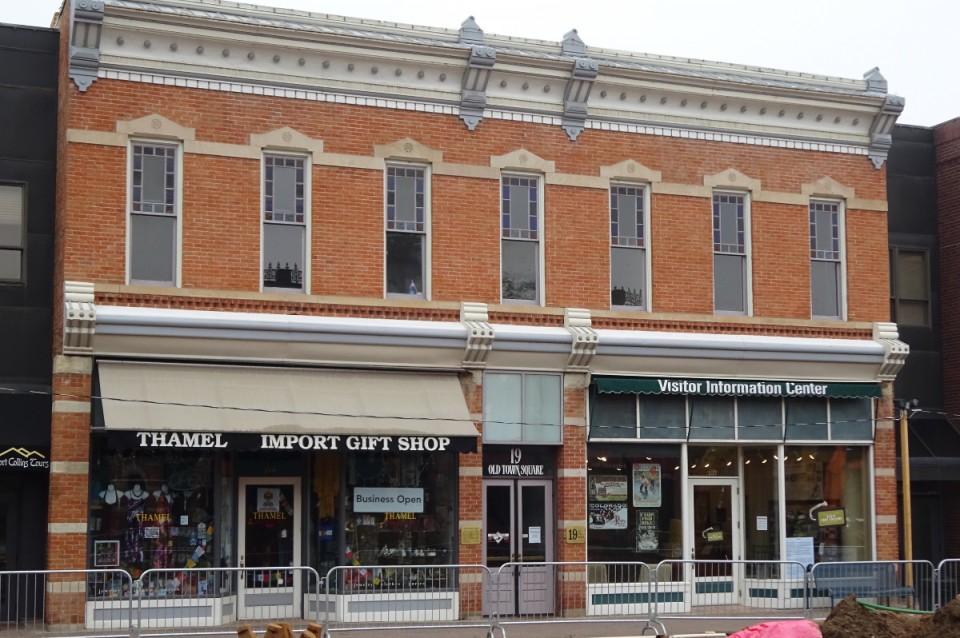 Now the Thamel Import Gift Shop and the Visitor Information Center, this building used to be a billiard hall and saloon. Imagine that… just two lots away from the Presbyterian Church where the local Temperance movement started.

Thanks to the construction that’s currently taking place in Old Town Square, this building is now more visible than it’s been for thirty years. The old stage used to block the view. 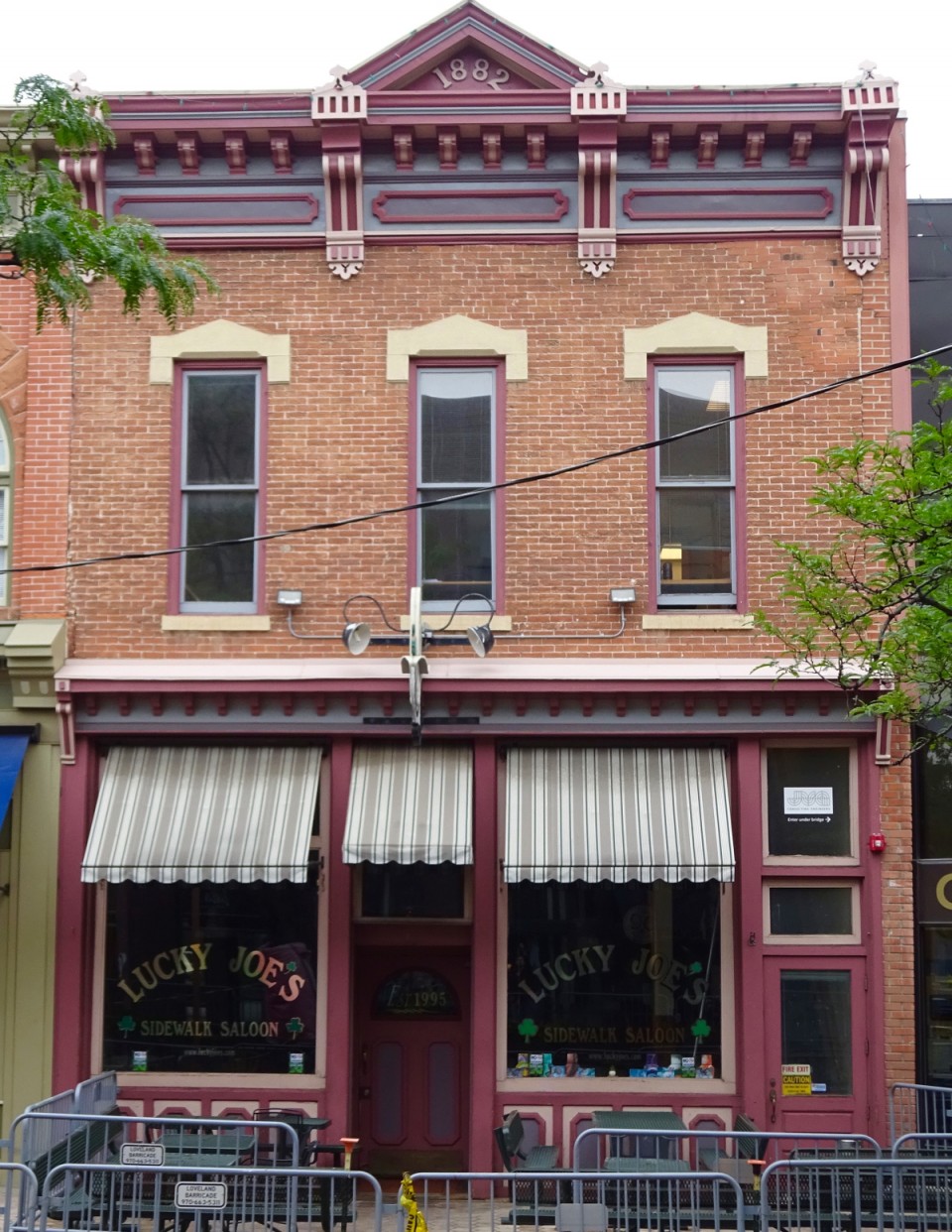 And the last building that still remains from this section of the map is the one that houses Lucky Joe’s Sidewalk Saloon today. In 1886, there was a bookstore there with a hand printing area in the back. 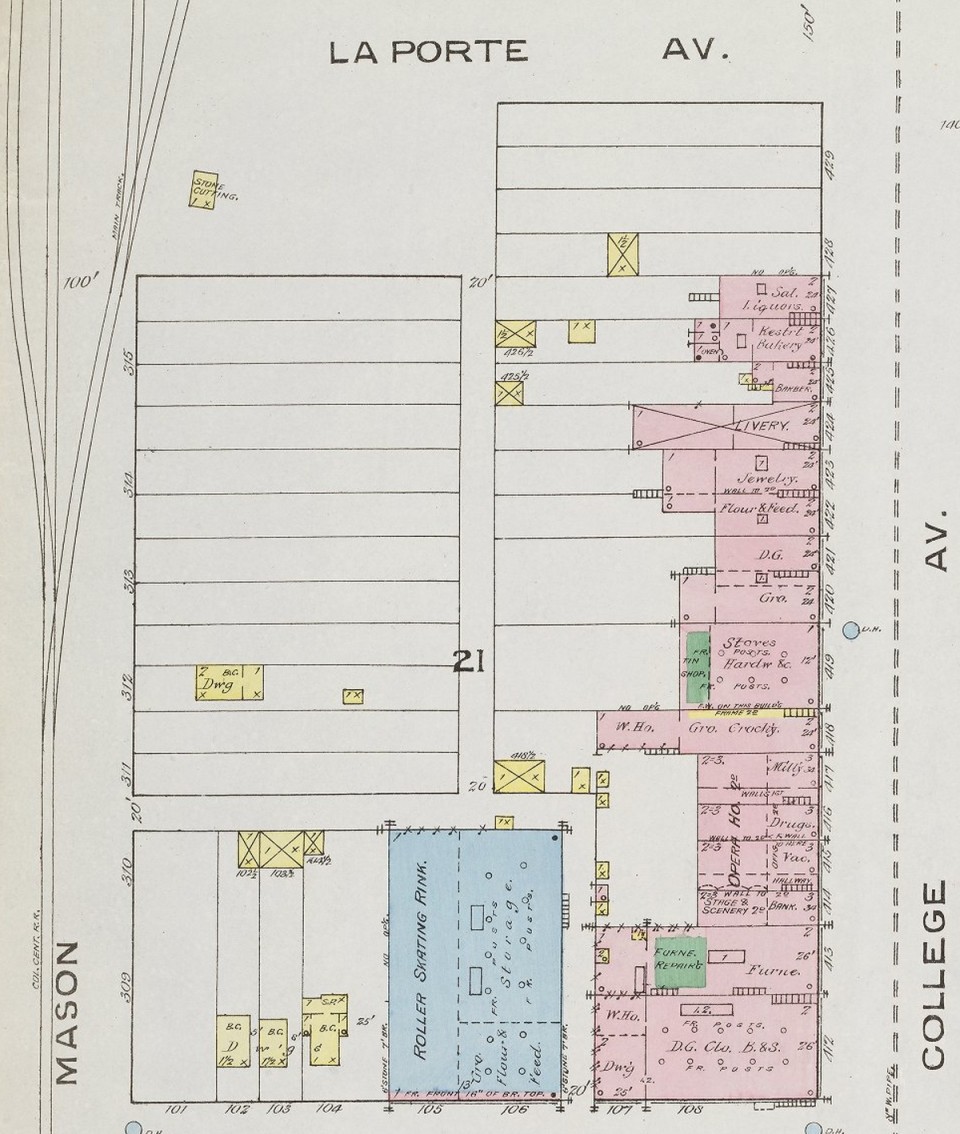 Moving west from the triangle, we come to the block bounded by the train to the west, College Ave. on the east, Laporte to the north and Mountain to the south. Note the roller skating rink located where the Fort Collins Candy shop is today. 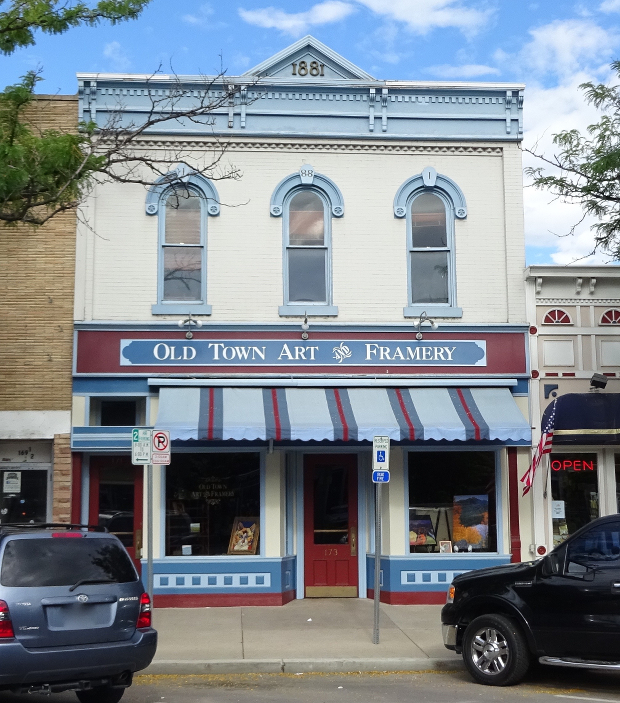 The Old Town Art & Framery building proudly displays the construction date of 1881. Not only is it listed at the very top, but the upstairs windows also declare the year. The Sanborn map lists this building as having been a saloon and liquor store when it was first built. Given that this was one of the first buildings visitors would reach after disembarking from the train, they probably did a brisk business. 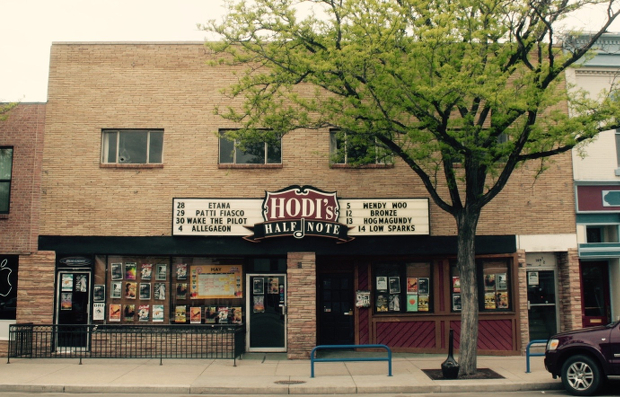 Currently labeled the Briggs building, this 1885 structure has been extensively remodeled leaving no trace on the exterior that it was originally built in 1885. According to the Sanborn map, the left side of Hodi’s used to be a barber shop and the right side used to be a restaurant and bakery. But the county assessor records list the original use as a saloon. 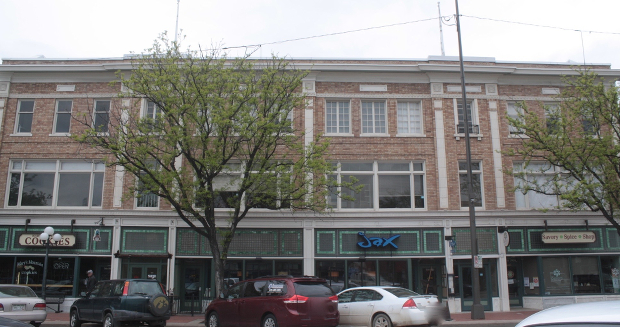 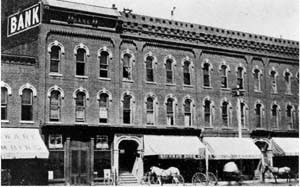 This photo from the Archive gives a sense of how much the facade has been changed from the original. 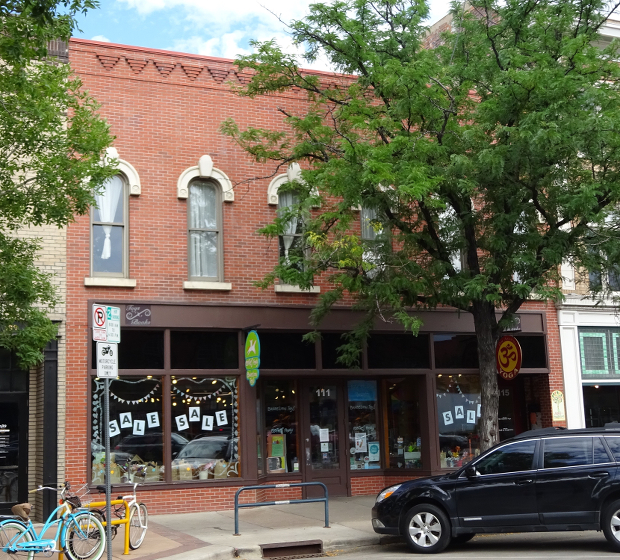 The building that houses the Clothes Pony & Dandelion Toys was built in 1885 and was originally a furniture store. Furniture was repaired near the back of the store. 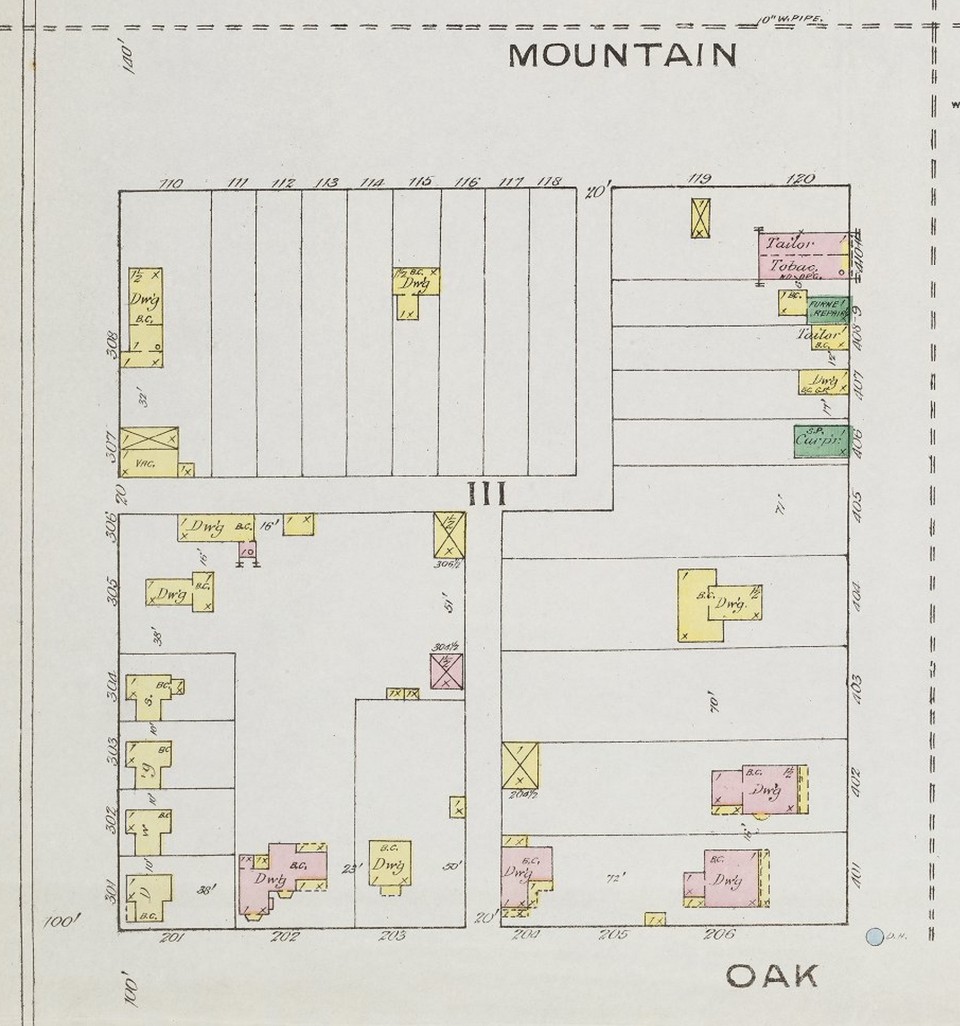 If we move south to the other side of Mountain, we find predominantly houses. (Dwg stands for dwelling.) There are a few shops near the intersection of Mountain and College, but that intersection wasn’t really “the place to be” until Franklin Avery built his grand bank building, complete with stone lion over the door, at the corner of Mountain and Linden in 1897.

If these buildings are still standing, they’ve been moved to another part of town. None remain on this block today. 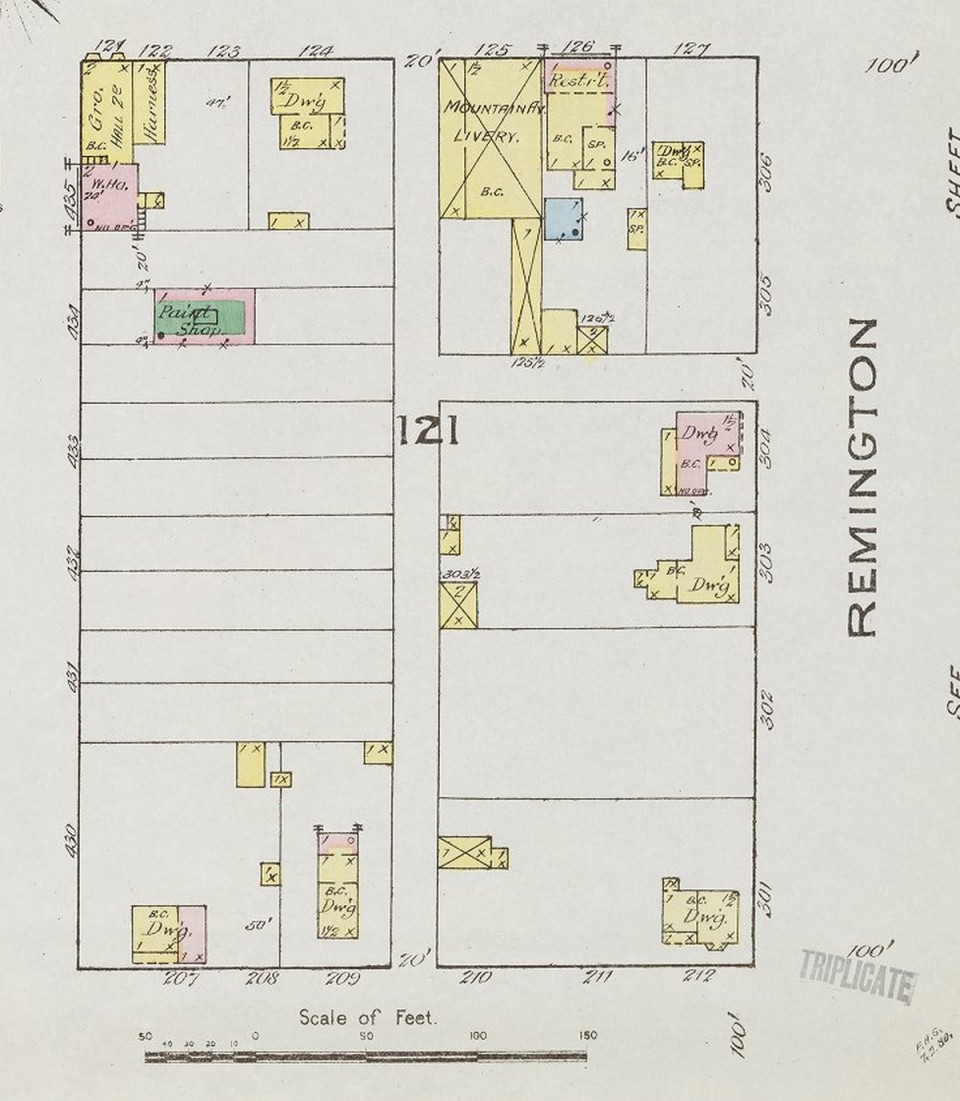 Heading east we again find a number of houses and only a few shops. None of these buildings remain today, at least not in these locations.

There are still two more pages from the 1886 Sanborn map to explore. Stay tuned!

Information on the Commercial Hotel came from two sources – “Northern Hotel, Fort Collins” by History Colorado (May 2003) and “Restoration and Preservation of the Historic Northern Hotel in Downtown Fort Collins!” (pdf) by the CSU Econ Department.

The County Assessor’s records were helpful in locating buildings that remain today. There are many old buildings that were built after 1886, so you can’t always guess just by eyeballing the buildings.