Before Google Maps, there were the Sanborn Maps. These maps were drawn up by the Sanborn Map & Publishing Company for use by insurance agents. The goal was to present a clear sense of what buildings stood on a lot — their general dimensions, shape, materials and use — so that insurance companies knew exactly what it was they were insuring. Men from the Sanborn Maps company traveled across the U.S. walking city streets, drawing up maps, and selling the copies to those in the city that would have use of them. These maps have since become treasures for historians as they’re a useful way of telling the age, location, and use of a building as well as determining the timing of additions, especially when permits or other documentation have been lost.

The earliest Sanborn Maps for the city of Fort Collins are from 1886. There are only four pages. The first page covered a general overview, the south end of town, and the Colorado Agricultural College (now CSU). Many of the buildings shown on the maps from 1886 are now gone, or have been moved to some other part of town. Those that remain today can be considered some of our oldest extant (still standing) buildings in Fort Collins. 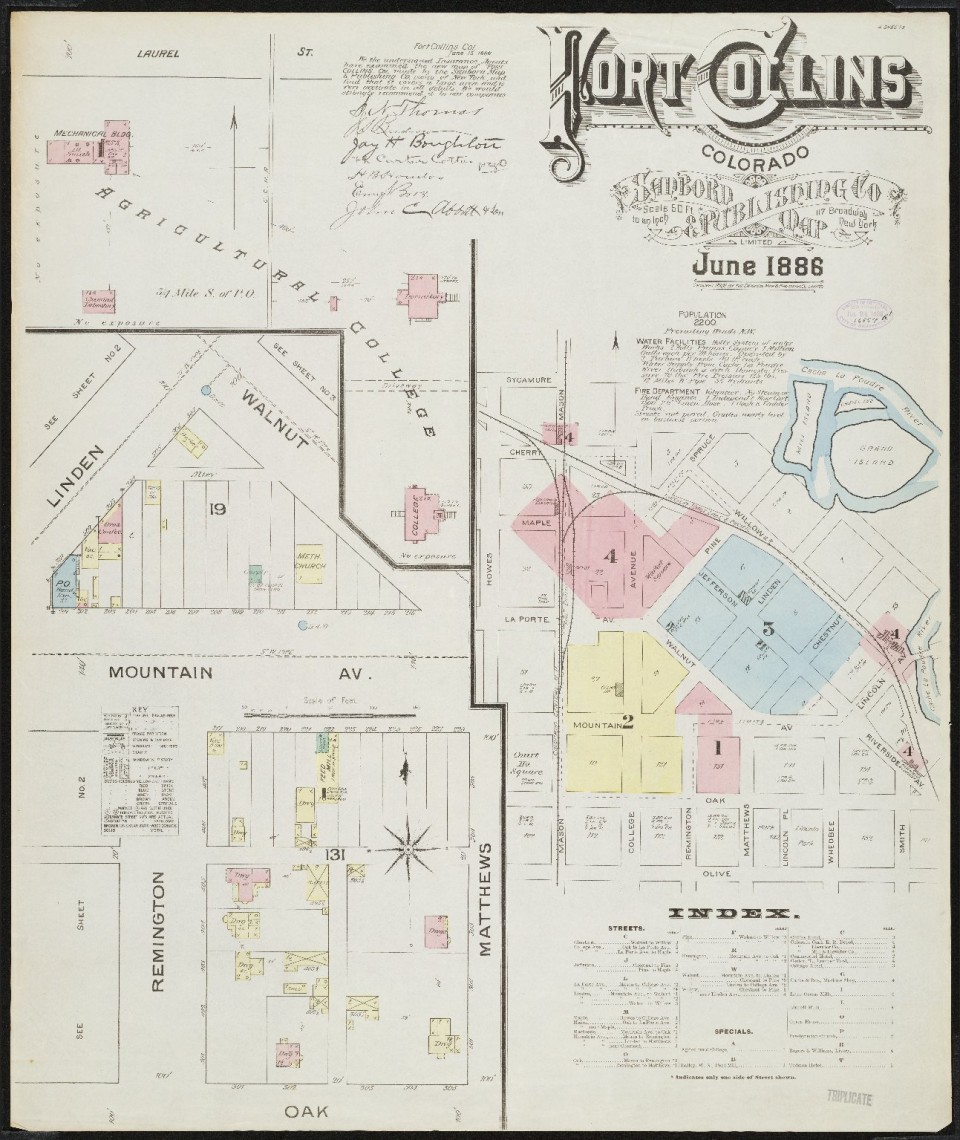 The right side of this first page is the Index and shows how the city was divided in the maps. Note that there are several streets that existed on the map, but that aren’t covered in detail. So any buildings that stood on Olive, along Howes, or on any of the other streets that had already been drawn up by Franklin Avery (the city surveyor), but that weren’t heavily populated yet, don’t show up here. 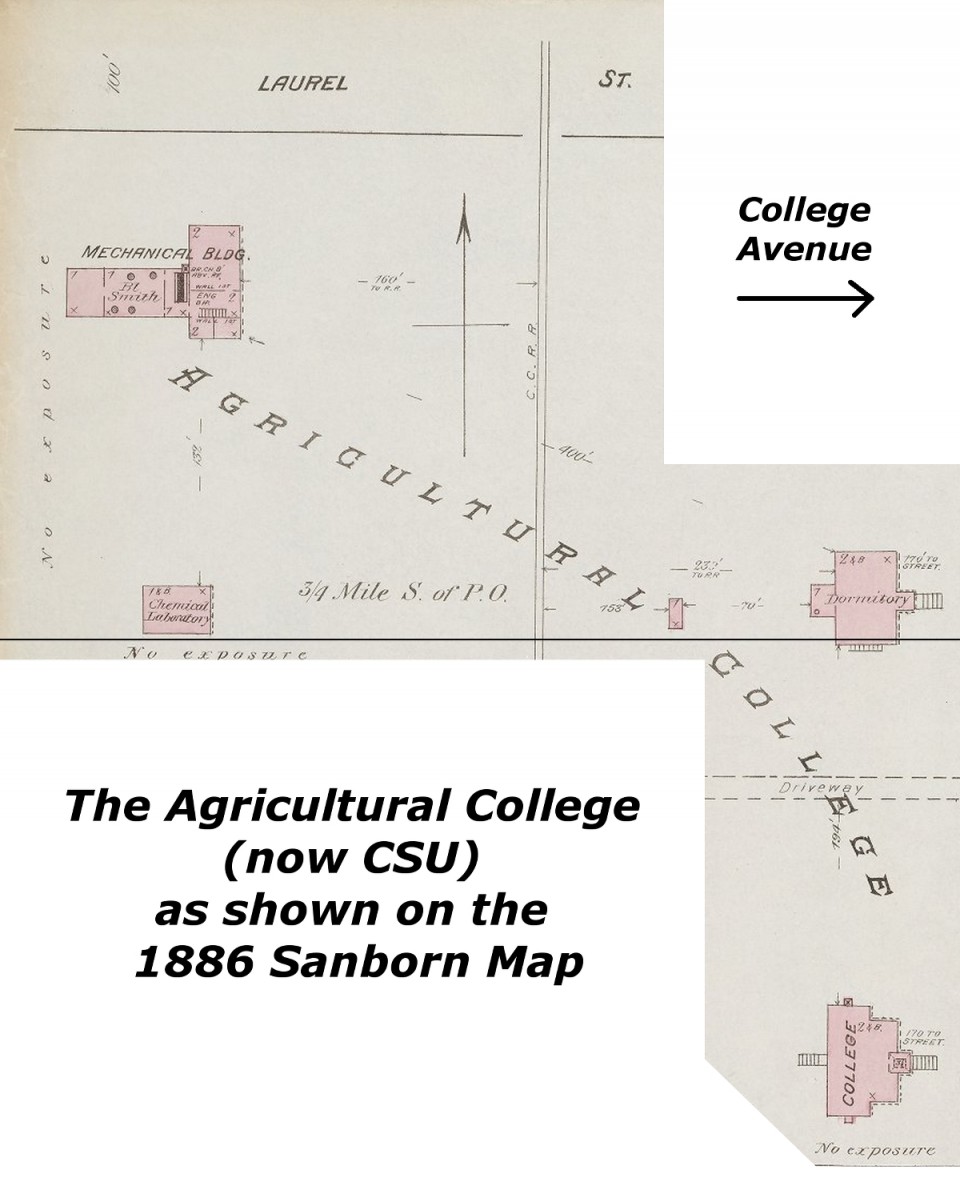 There are five structures shown in the map for the Colorado Agricultural College. The southernmost building was labeled only “College” and was the “main” classroom building for the school. Over time it came to be known as Old Main. It burned down in 1970 during a time of unrest at the University. The fire was thought to be an act of arson, but the perpetrator(s) was never caught. 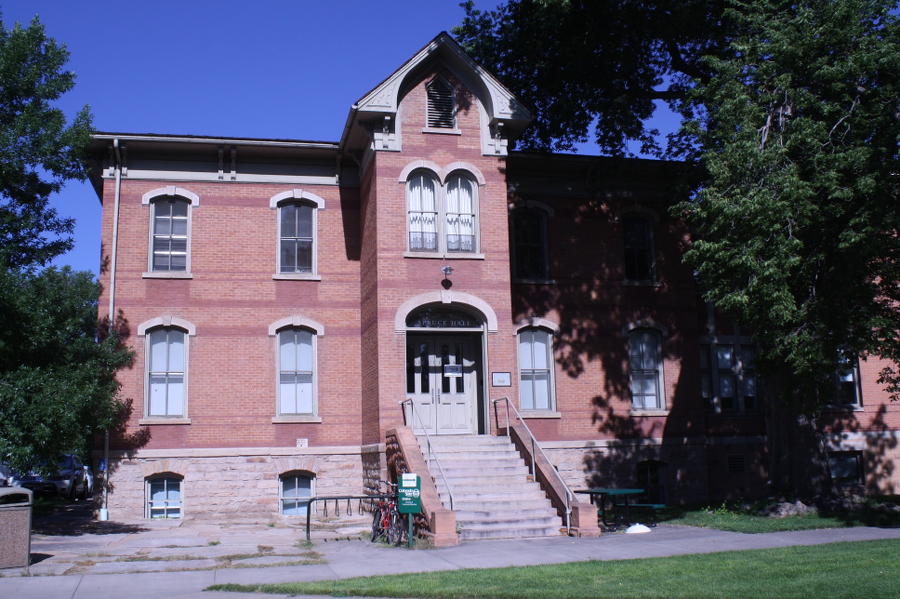 Just north of the Main College building was the dormitory, now called Spruce Hall. It was designed and built by Hiram Pierce in 1881. Due to the loss of Old Main, it is now the oldest building on the CSU campus. You can read more about this building, including the allegations of inappropriate fraternization, in the National Landmark Designation nomination form for this property (pdf).

There are two little buildings west of the dormitory. One is labeled Chemical Laboratory. (And the building appears to be a safe distance from the rest of campus, just in case there are any accidents.) The other bears no description at all. As far as I can tell, both of these buildings are now gone. 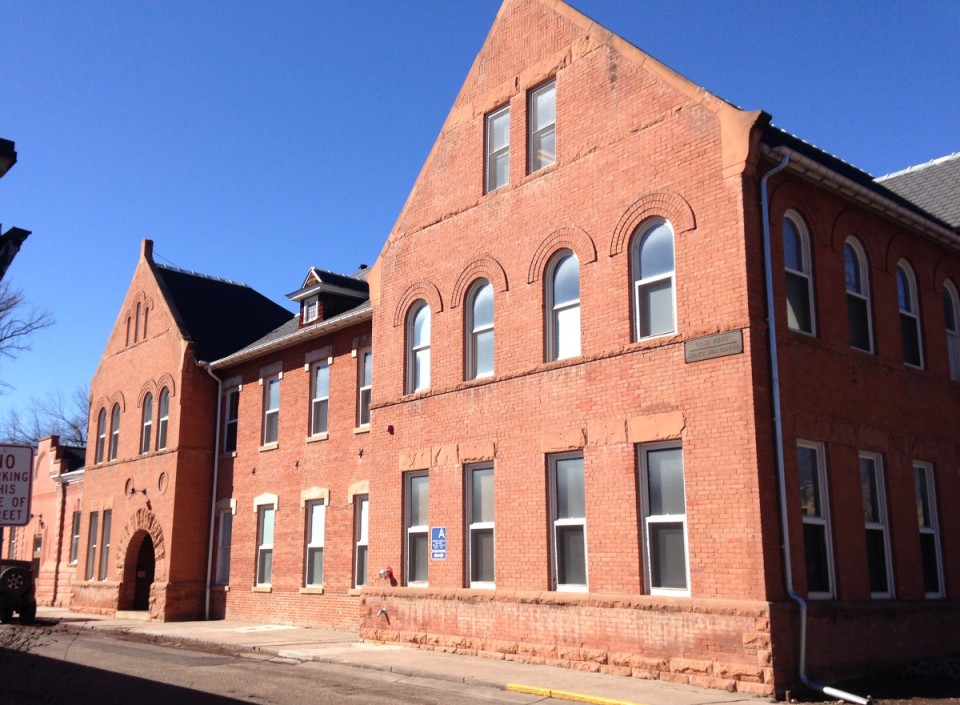 The Mechanical Engineering building was built in 1883, but it underwent additions in 1892, 1896, 1899, and 1925. As shown in the map, it originally faced the rest of campus, which was to the east, towards College Avenue. But as additions were added, the building was remade so that what is considered the front of the building now faces W. Laurel. And what used to be the front faces a small alley named Rembrandt Drive.

I chose a photo of the east side of the Industrial Sciences building to match the orientation on the Sanborn map. But in 1886, the building didn’t look like this, even from this side. (I tried to find a photo of what it did look like and was unsuccessful. But if you know of one, I’d love to see it!) 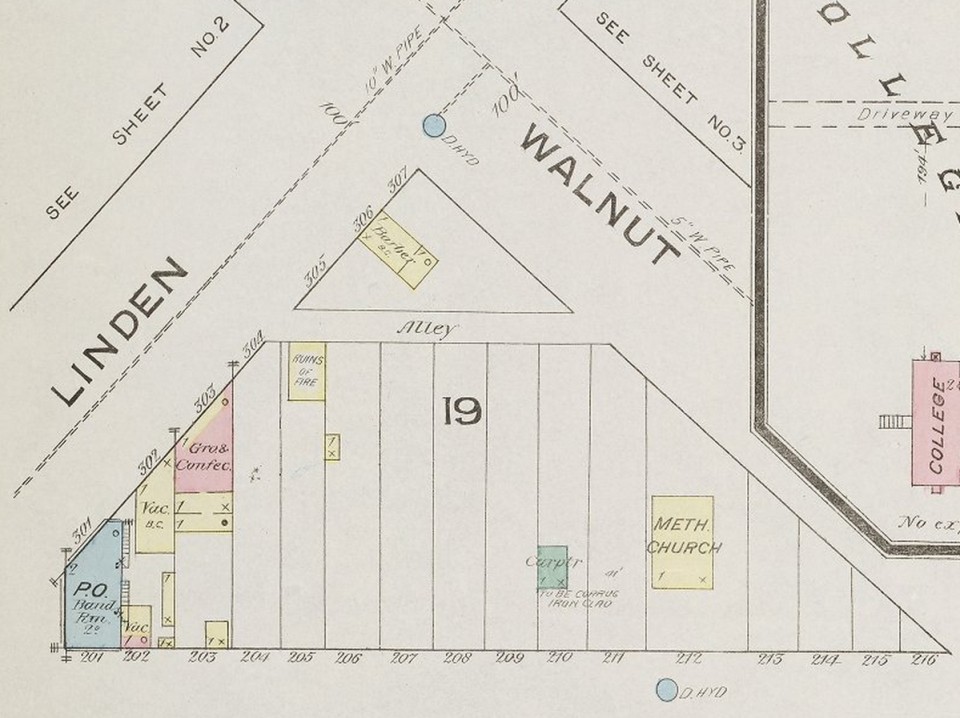 The rest of the first page of the Sanborn Map from 1886 deals with a small part of what we now consider to be downtown. As you can tell from the map, however, it certainly wasn’t the hub of activity that it is today.

To help orient yourself to what you’re looking at, the teeny triangle at the corner of Linden and Walnut is no longer triangular. The Miller Block (think Little Bird Bakeshop or Bondi Beach Bar) replaced the barbershop that is shown in the map. It’s a (mostly) rectangular building and the alley was altered accordingly. The Methodist Church shown in the map is about where the Bohemian Foundation building is today. And the big open area that was probably just a field of weeds in 1886 is now Coopersmith’s Pub & Brewing.

I don’t believe a single one of these buildings on this section of the map survives today.

This block, bounded by Mountain, Mathews, Oak and Remington, contains a parking structure today in the northwest corner. There’s a new office building planned for the northeast corner (where a tire shop has been until recently). Burt’s Logo Apparel is on Remington. And along E. Oak is a Yoga Center and a Reorganized Church of Latter Day Saints meeting hall, among other things. 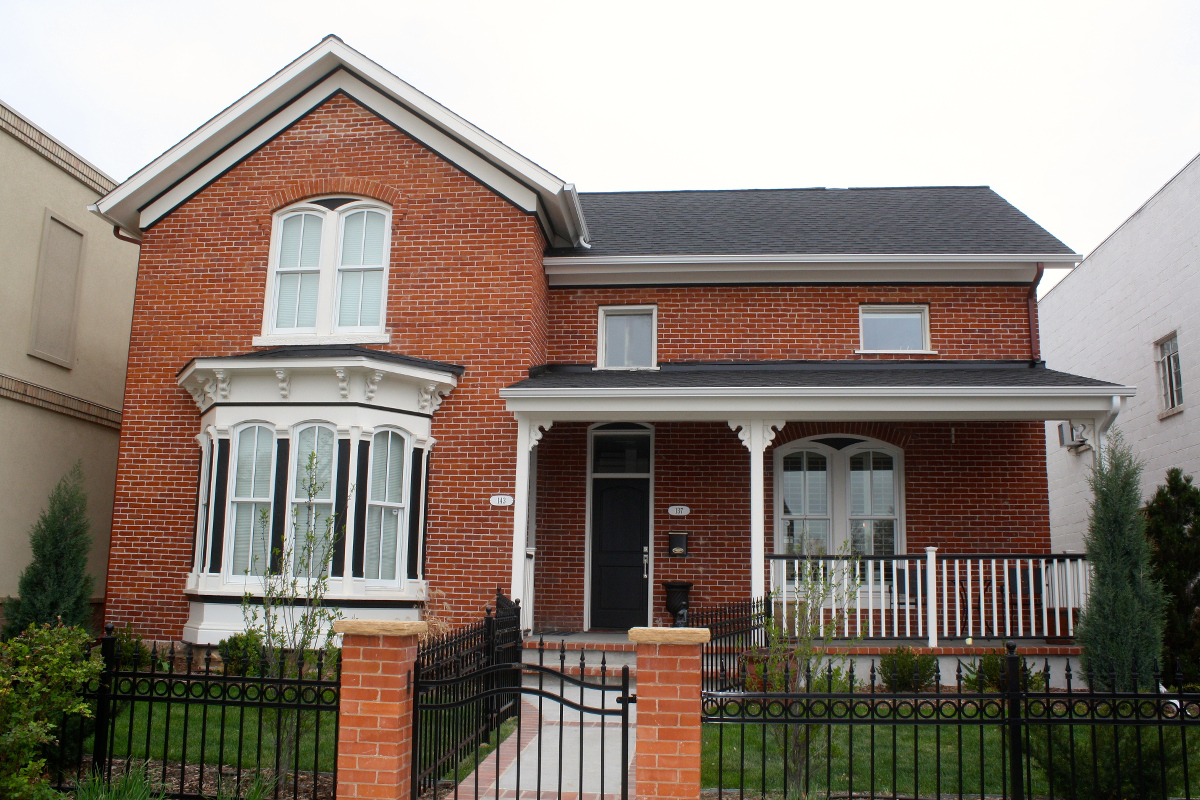 137 Mathews was built in 1879 for Josiah McIntyre, a blind Civil War veteran who later became the first person to get a law degree in Larimer County. The building was recently subdivided into two residential units.

The only building from this section of the map that still stands today is the McIntyre house on Mathews Street. It’s listed as 503 Mathews on the map, but the addresses were changed around the turn of the century and now it stands as 137 and 143 Mathews Street.

Most of the buildings in this last section of the map are labeled “Dwg.” This means dwelling. Other than the feed mill/carpenter shop and the vacant blacksmith shop, the rest of the properties are residential. It’s possible that some of these buildings are still around today. It wasn’t uncommon for buildings to be hoisted up off of their foundation and moved to another location. But it takes a lot of time to sort through old records and figure out which buildings went where. So I’m going to leave that for some doctoral student to sort out some day.

From the first page of the 1886 Sanborn Map, there are three buildings that are still with us today. Be watching for future articles in which we’ll see how the rest of the city fared.

The Sanborn Maps are available online through Colorado University, Boulder.

Background information on the CSU buildings came from the University’s History and Buildings page.