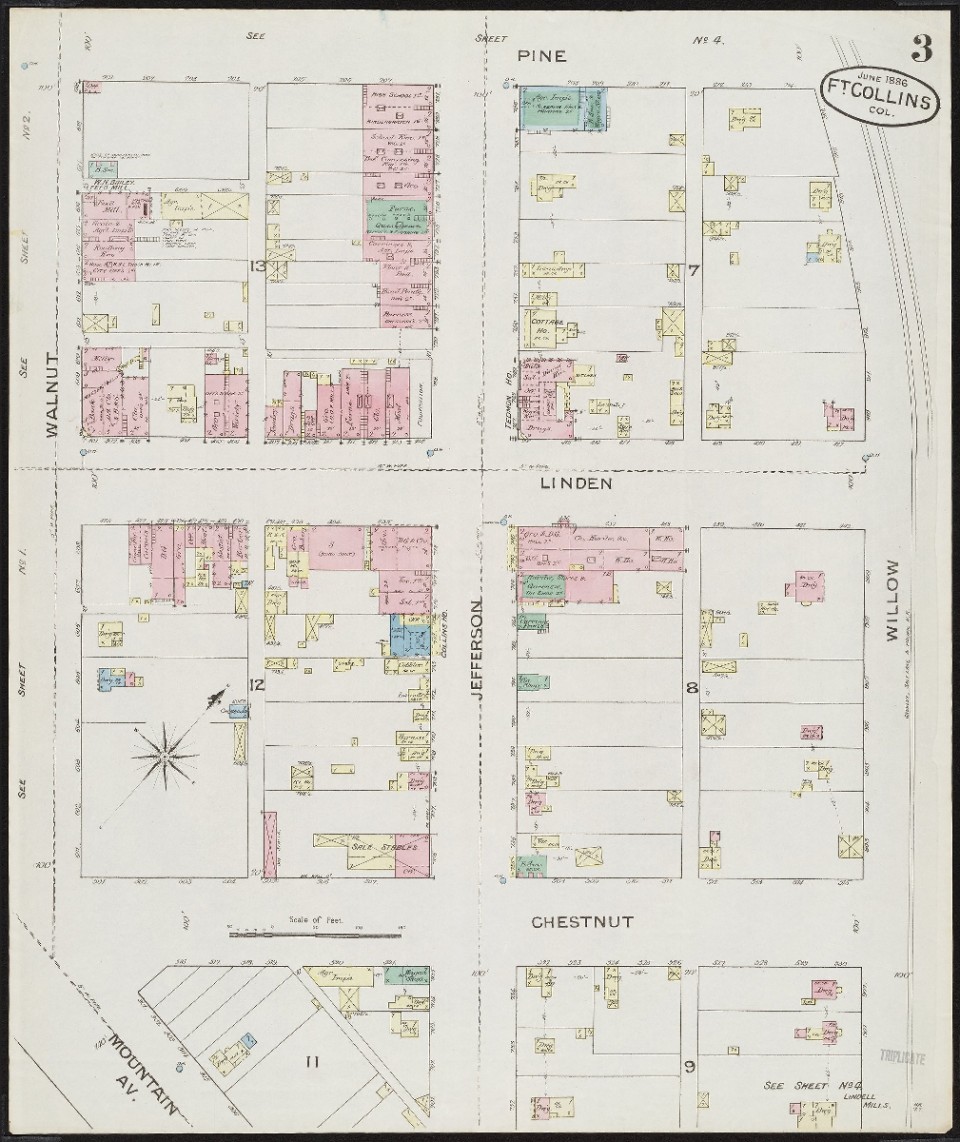 This page of the 1886 Sanborn map is somewhat disorientating. Though it’s common knowledge that the “Triangle” of downtown encompasses the oldest part of the city and uses the original orientation as well, we’re not used to looking at maps that use that original orientation. But here we are looking at a map where Walnut, Jefferson, Chestnut and Pine look “normal” and it’s Mountain Avenue (popping up in the lower left corner) that appears askew.

In looking through old newspapers, I’ve come across a few references to the “old town”. (It’s never capitalized.) One article from 1894 helpfully explained where the old town was… essentially the area around the intersection of Willow and Linden, which is where the parade ground of the original fort had been. So at the time that the 1886 Sanborn map was drawn, people were already referring to this part of town as old and the section we looked at last week (along College and Mountain) as new. In fact, the center of new town was considered to be where the post office stood. According to an 1889 article, Whedbee’s store, on the southeast corner of Mountain and College, contained the post office at the time. (This is the same corner where First Bank stands today.) 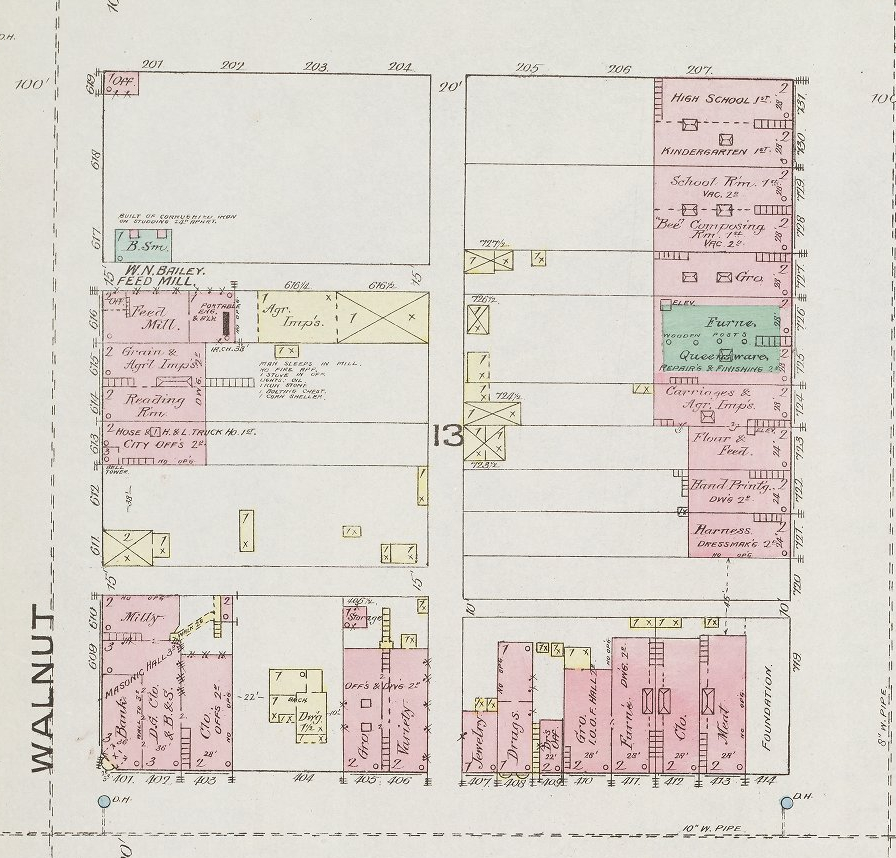 We’ll begin by looking at block 13 — bounded by Walnut, Pine, Jefferson, and Linden. I was intrigued to see that the high school and kindergarten were located right at the corner of Pine and Jefferson in a building that is simply a vacant lot today. (If you walk past, however, the stoops are still intact, so you can see where the entrances once were.) 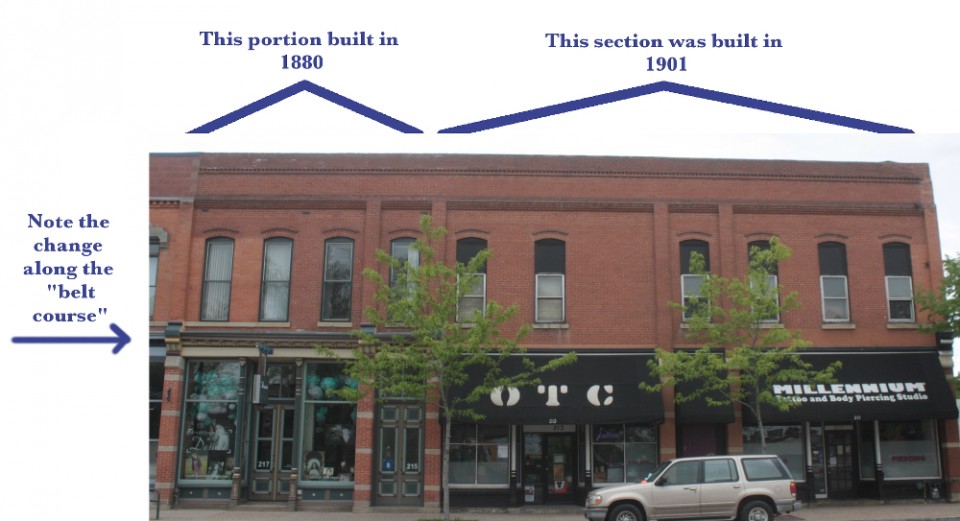 The little sliver of building at 215/217 Jefferson Street was around in 1886, but the rest of the building that it appears to be attached to was not. I suspect it received a bit of a makeover when the neighboring building was added. The very top of both buildings look the same. But the middle section (also called a cornice or belt course) is more ornate on the older building. Another hint that 215/217 is its own structure can be seen when using Google Maps. There’s a clear distinction between buildings when you look from above.

Now a photography shop with offices overhead, this property was listed as being a grocery in 1886. The shopkeeper likely lived on the second story. 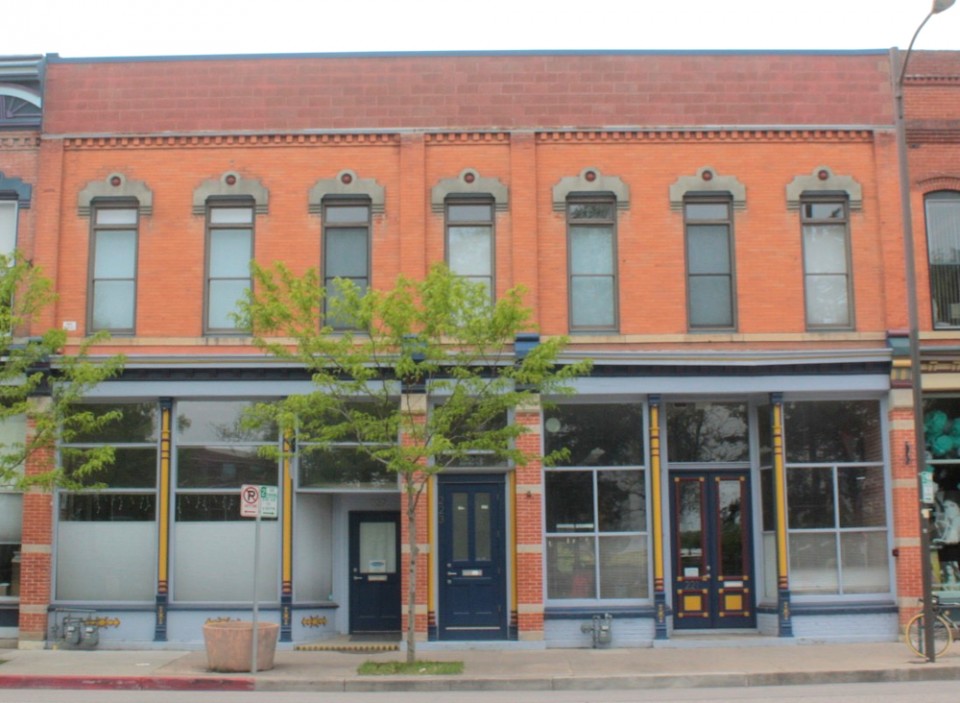 Next to the grocery store was a furniture shop. It was also listed as being a location for Queensware repairs and finishing. Queensware was a type of Wedgewood china made in London. The popularity of the tableware came not so much from the quality of the product, but from the fact that a set was presented to Queen Charlotte, which secured a “Royal Appointment” for the makers. And of course everyone wanted to use the same china that a Queen deemed estimable. 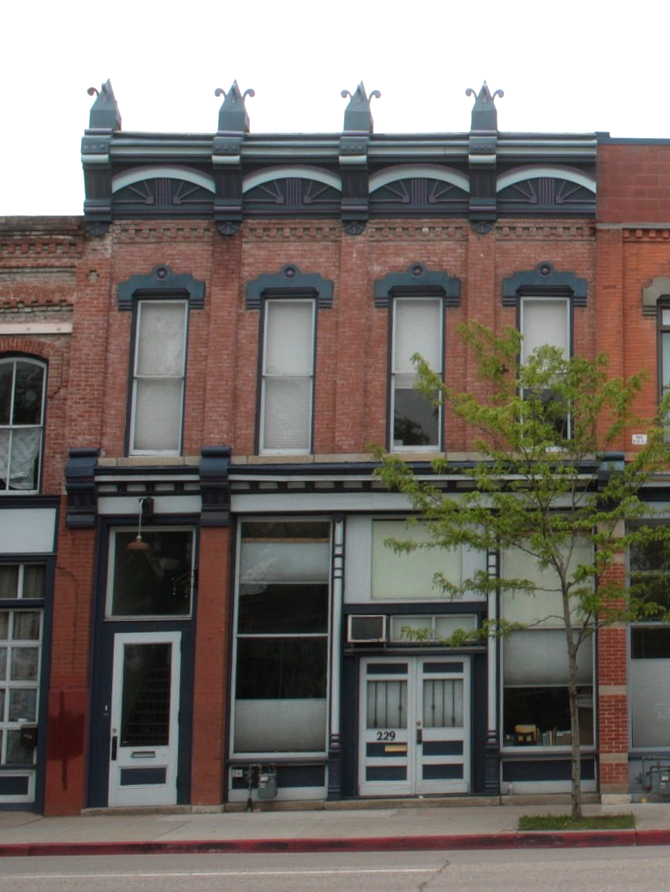 Research can sometimes bring up incongruities that lead to a bit of head scratching. According to the county assessor records, this building was constructed in 1930. … Does this building look, even a little bit, like something that would have been built during the Great Depression? … I think not.

A search through the city’s online archives, however, produces a date that looks more likely. According to the information attached to a 1969 photo of this property, it was possibly built around 1870, which would make it one of our oldest remaining buildings in the city! According to the National Register of Historic Places nomination form, the second story of the building looks pretty much exactly as it did from the time it was built.

In 1886, this building housed a carriage and agricultural implements store. 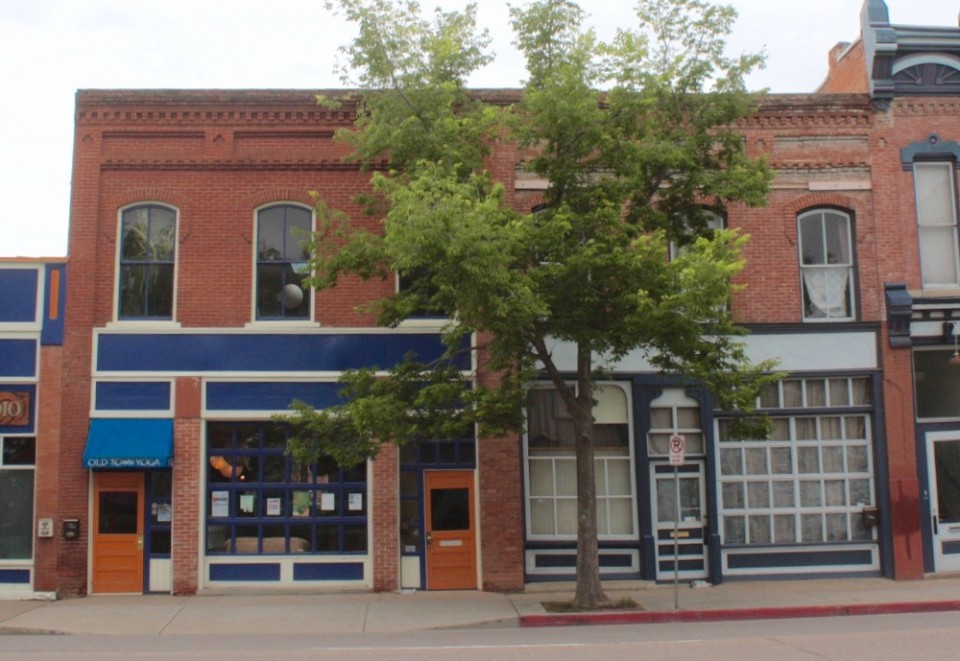 These two buildings are listed as one in the National Register of Historic Places nomination form for the Old Town District. But in the County Assessor’s records, the building to the right is lumped together with 229 Jefferson, which is clearly an altogether different building.

In 1886, these buildings housed a flour and feed store (which looks like it was connected to the carriage shop with an internal doorway) and a hand printing shop (as well as an upstairs apartment). 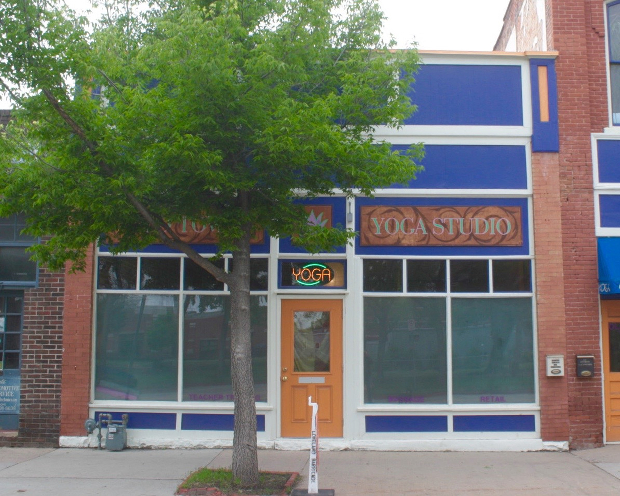 This building used to have a second story. There was a harness shop on the main level and a dressmaker on the second. 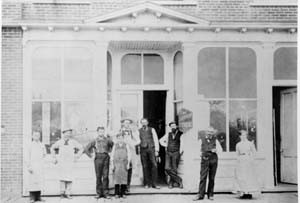 This photo from the Fort Collins Archive, circa 1884, shows how the building has changed. The bottoms of windows can just barely be seen at the top of the image.

Traveling around the corner and down Linden, we come across a handsome set of four old buildings in a row. 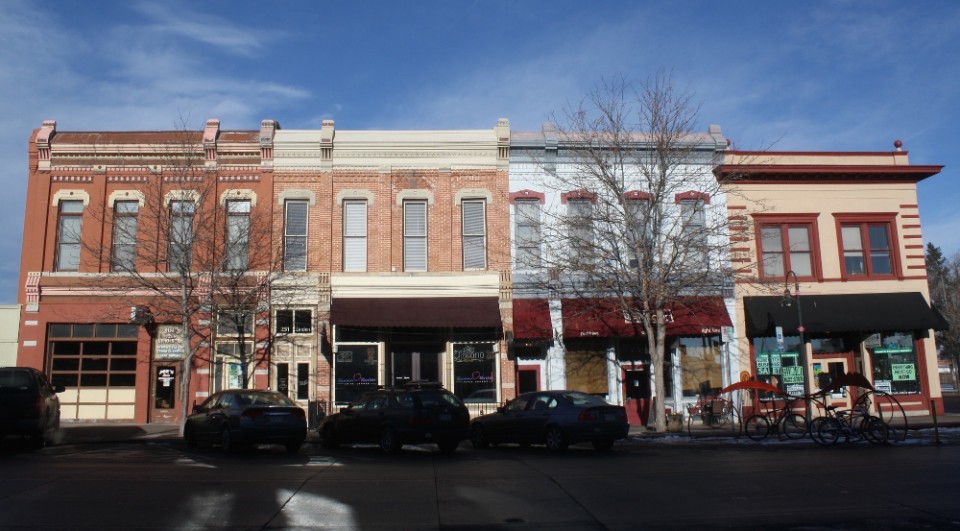 The first building on the left is 247 Linden and, for the past 70 years, it has housed Joe’s Auto Upholstery. In 1886, it held a furniture store on the first level and several apartments on the second. Next to that is 251 Linden, which once had two bears living on the first floor. (I’m hoping to write a story on Peggy and Pete at some point.) In 1886, there was a clothing shop on the first floor and apartments on the second. The third building, 255 Linden, used to house the Standard Meat Market. And the fourth building wasn’t built until 1887, at which point it was only one story tall. Its second story was added in 1905. That corner was the location of one of the city’s earliest buildings, Old Grout, which had been the heart of early Fort Collins. It was torn down in 1882. 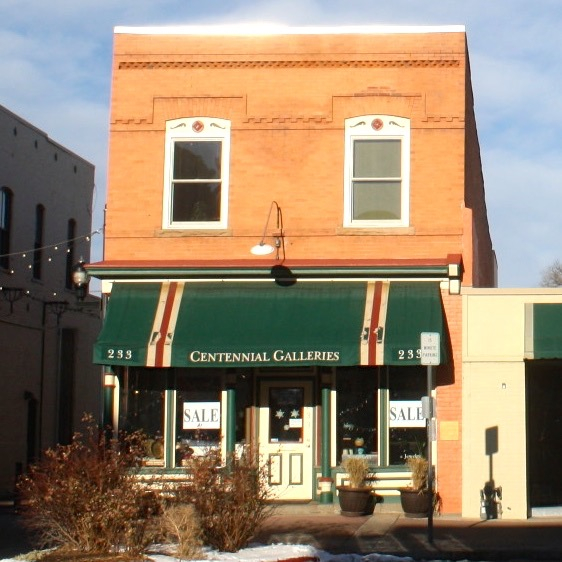 The Centennial Galleries building was built in 1878 and once housed a jewelry store. 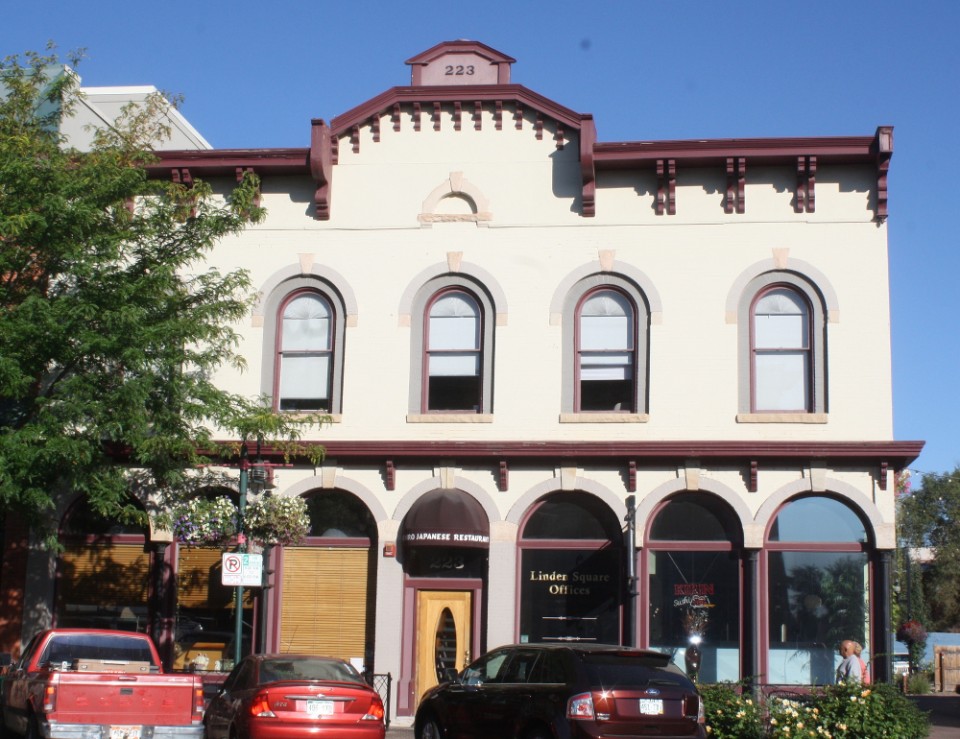 In 1886, this building held a grocery and a variety store on the first floor with offices and apartments upstairs. This building also housed the Salvation Army for awhile.

Between this building and the Linden Hotel the Sanborn map shows a house. When reviewing the previous two pages of the Sanborn map, I’ve stated that there were several dwellings listed that might still be with us today, but if they are, they’ve been moved and it would take quite a deal of work to figure out where they’ve all gone. It’s just as likely that the buildings were torn down and their materials reused. But I just happen to know the person that lives in the house that’s shown here on the map, even though it doesn’t stand in this spot today. 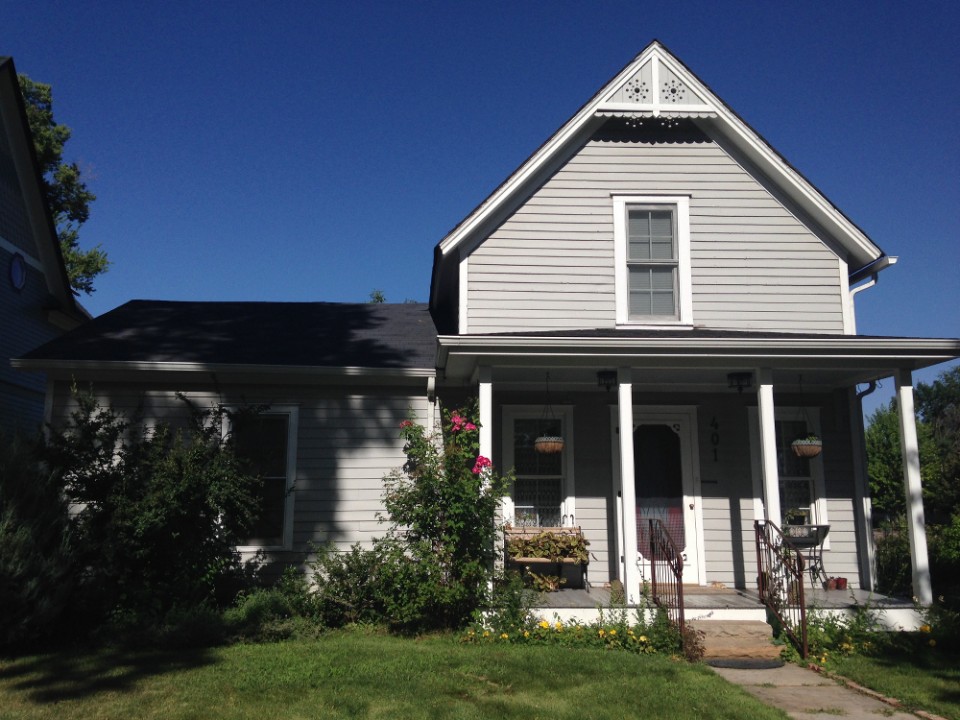 This house used to stand next to the Linden Hotel.

Once on Linden, this house can now be found on Smith Street. A room has been added on the left side and there have been additions in back as well.

We’re finally half way around the first block of this page in the 1886 map and already we’ve come across more buildings that are still with us (and still retaining much or their original look) than we did in either of the last two pages from 1886! Whew! 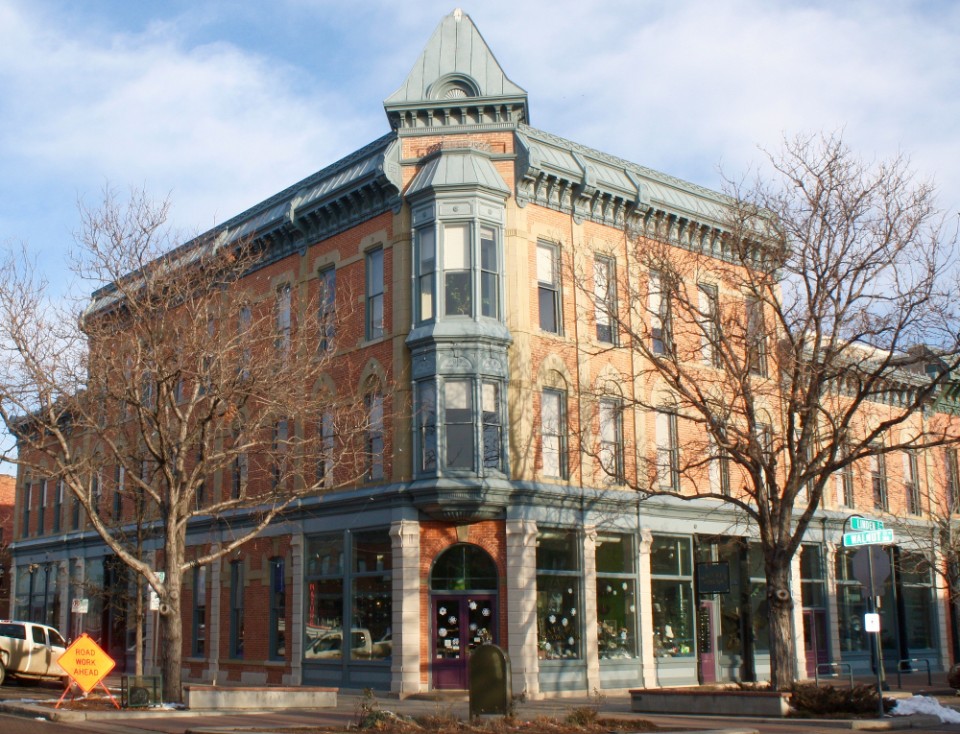 This building has come to symbolize how wonderful Fort Collins is. Fort Collins is constantly making this or that top ten list and what picture do they use? One of the Linden Hotel with two cyclists pedaling past in front. It’s hard to believe that the building was almost lost when it was being restored in the 1980s. One wall was so precarious, that it is only by the grace of the city’s chief building official that it wasn’t condemned and demolished.

In 1886, this building housed a bank, a dry goods store, a millenary, and offices. Today many people know it as the Nature’s Own building.

Once we turn the corner onto Walnut, we only have a couple of buildings that remain. 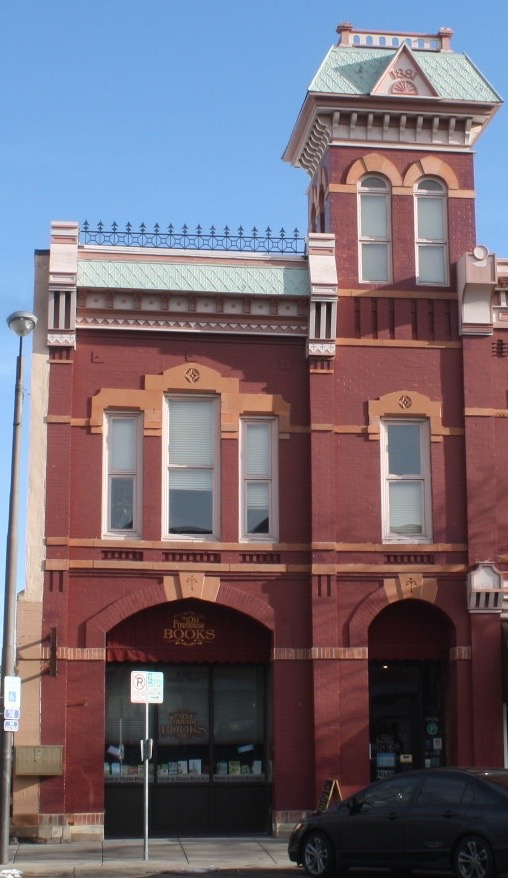 You’re probably looking at the above photo and thinking, “What in the world?!” But in 1886, this was the only part of the Old Firehouse that had been built. The other side, where Happy Lucky’s Teahouse is located today, wasn’t added until 1901. The hose & ladder truck and city offices were here. 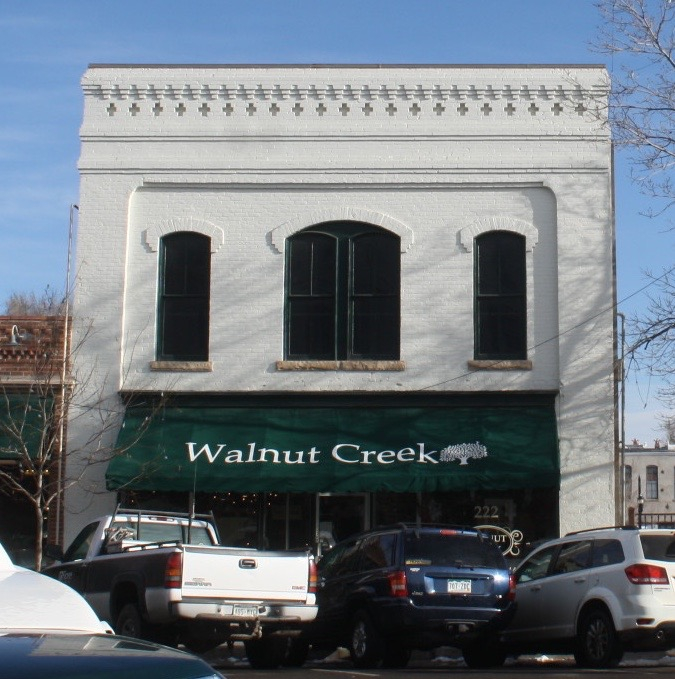 And the last extant building on the block that was listed on the 1886 Sanborn map is 222 Walnut. It used to be a feed mill with agricultural implements for sale out back. 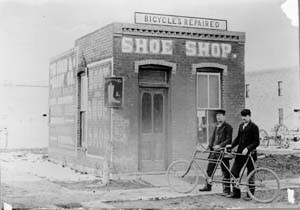 And if you’ve ever wondered where this darling little shop used to stand, check out the Sanborn map at the corner of Walnut and Pine. This itsy bitsy little place is off on its own in an area that had yet to develop, but soon would thanks to passengers being let of at the train depot just down the street on Laporte Avenue.

I’ve only covered a quarter of this page of the map, but I think this is more than enough for one day. Stay tuned for the rest of page 3 as well as page 4 in upcoming posts.