In 1886, a Sanborn insurance map was drawn up that shows the buildings in Fort Collins at the time. Most of these have been lost to us, but a few remain. See previous pages of the map here: page 1, page 2, beginning of page 3. I’m going to jump right into the rest of page 3.

If we start at the corner of Walnut and Linden, we find an empty lot. The Elks building would eventually be built there. Though the top two stories were lost in a fire, the bottom level remains today and houses the Wright Life. But the building next door was around in 1886 and is still with us today. 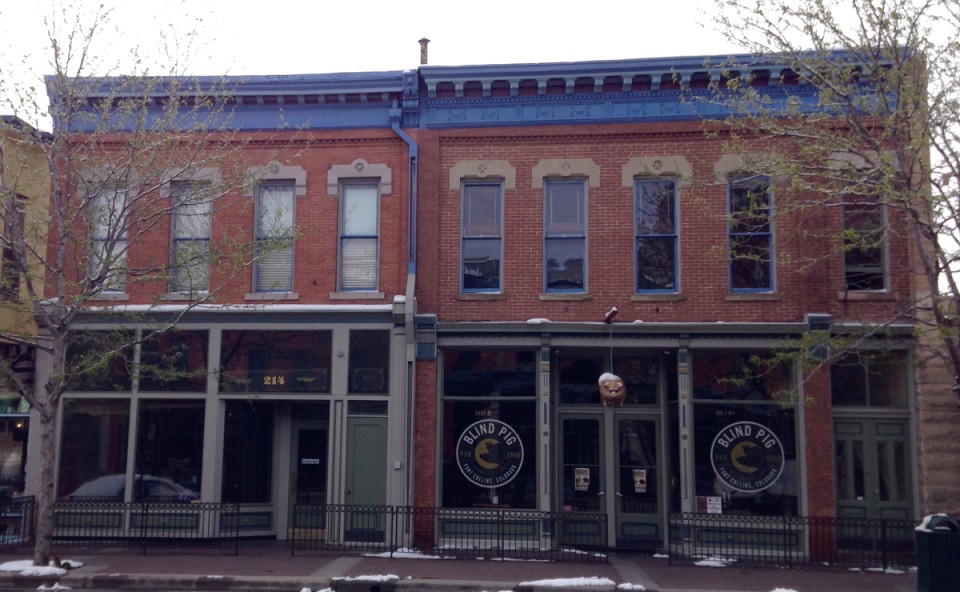 Next to the empty lot on the map is a building that housed both a cigar shop and a carpet store. The Blind Pig is located in the building today. And next to that was William Bernheim’s dry goods store. Bernheim was the first Jewish person to live in Fort Collins (at least, as far as I’ve been able to ascertain). Though he ran a very respectable and, from all accounts, prosperous store, the severe recession in 1893 hit him very hard. He is buried in Grandview cemetery without a stone marking his location. You can learn about Bernheim’s story in a previous post entitled “William S. Bernheim and Family.”

According to the county assessor’s records, 210 Linden was built in 1875. Around the time that the map was drawn, it housed McDougal’s Tailor Shop & Lauterbach’s Cigar Shop.

The assessor records list 214 Linden, as being built in 1895. But the newspapers are clear that Bernheim built his dry goods store in 1881. So I dug a little deeper and came across a photo at the Archives that shows Bernheim’s building in 1886 and it looks like the same building that stands there now. 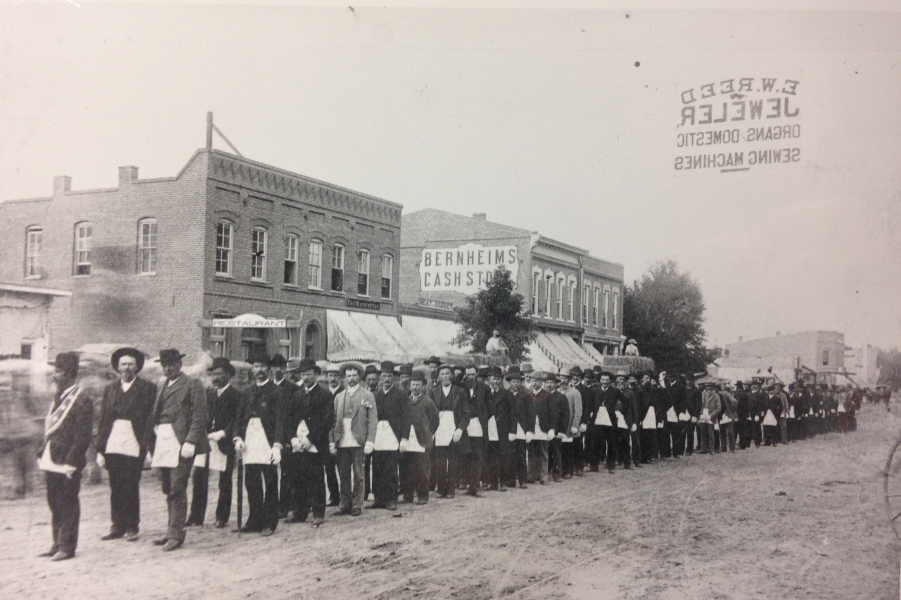 The distinctive roof on Bernheims Cash Store remains today, giving further credence to the fact that the county assessor’s records are sometimes just an educated guess.

This photo is also particularly helpful in determining whether the next few buildings on the block that were on the 1886 map and are still with us today. There’s a plaque on 218 Linden saying that the building used to house Christian Philippi’s harness shop. But the only photo of Philippi’s shop that I’ve been able to locate through the archive was located on the 300 block of Jefferson. Unfortunately the awnings in the above photo hide the features of the one story buildings. But based on the assessor’s records and photos of the street, I’m going to say that neither of those two skinny buildings that stand on Linden today are the ones shown on the 1886 Sanborn map.

The next building on Linden today is the Antlers Hotel, which was built in 1902. It replaced the two story building shown towards the left of the above photo. 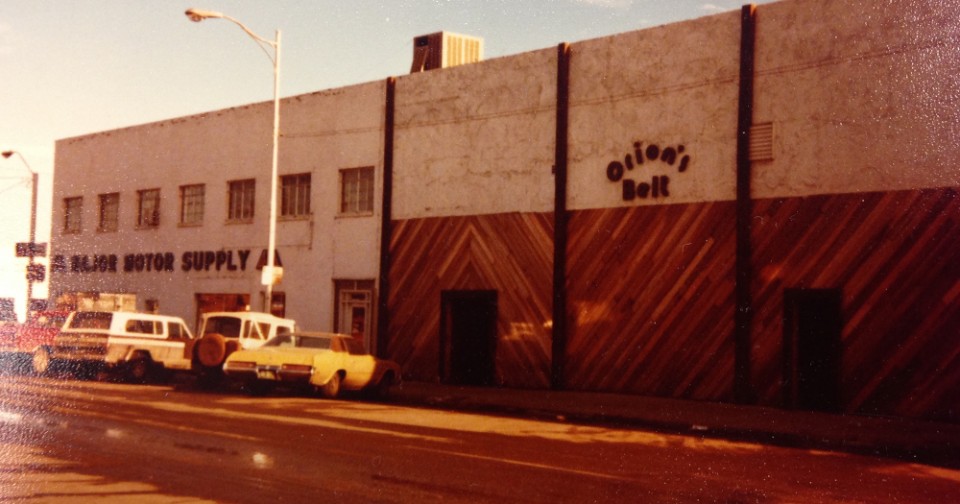 Galvanize is now located in the building that used to house Orion’s Belt – 1979. (Photo from the Fort Collins Archive – H25111.)

As we jump across the alley, the next building on the map was built of wood (where boots and shoes were sold), followed by a brick bakery, both of which no longer remain. The building that’s listed as “being built” was just recently renovated. It now houses Galvanize, a tech incubator. When the developer, Blue Ocean, began plans to update the building, they tried to peel back bits of the facade, looking for the original building. But the building had undergone so many updates over the years that nothing of the original facade remained. So there is some original material in the building… but you would never know it from looking at it.

The same is true for the building that wraps the corner of Linden and Jefferson where the Artery is now located. One of the oldest remaining buildings in Fort Collins is now part of the Artery building (facing Jefferson), but it has been changed so radically on the street side, that it has lost its historical integrity. (Which is another way of saying, there might be an old building in there somewhere, but good luck trying to figure what it used to look like.)

My pattern in these posts has been to include photos of the buildings that were around in 1886 and that are still with us today. I take a lot of photos of downtown, so for the most part, I’ve been able to look back through the pictures I’ve taken and pull out the ones I need of the various buildings. But this time I not only don’t have a picture to use, but I’m not really inclined to go get one. That’s how nondescript this building is. I’d almost venture to guess that it’s been charmed with some Harry Potter-esque spell that enables you to see the building and then immediately forget it. It truly is just that unremarkable.

As we travel around the block, we don’t meet up with an 1886 building that’s still with us today until we get to LeRoy’s Locksafe. 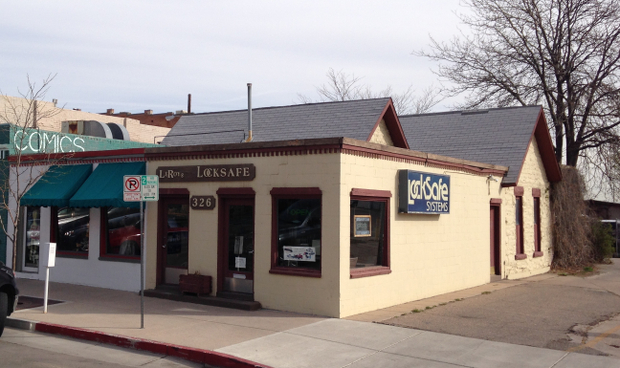 Leroy’s locksafe used to be the home of Charlie Reingold, an observant Jew that used to sit on his front porch in the Colorado sunlight, reading from his prayer book. But by the time that Reingold lived in this place, it had already been around for several decades. The house has since been treated to a commercial wrap, which has landed it in my list of Jack-in-the-Box houses in Fort Collins. 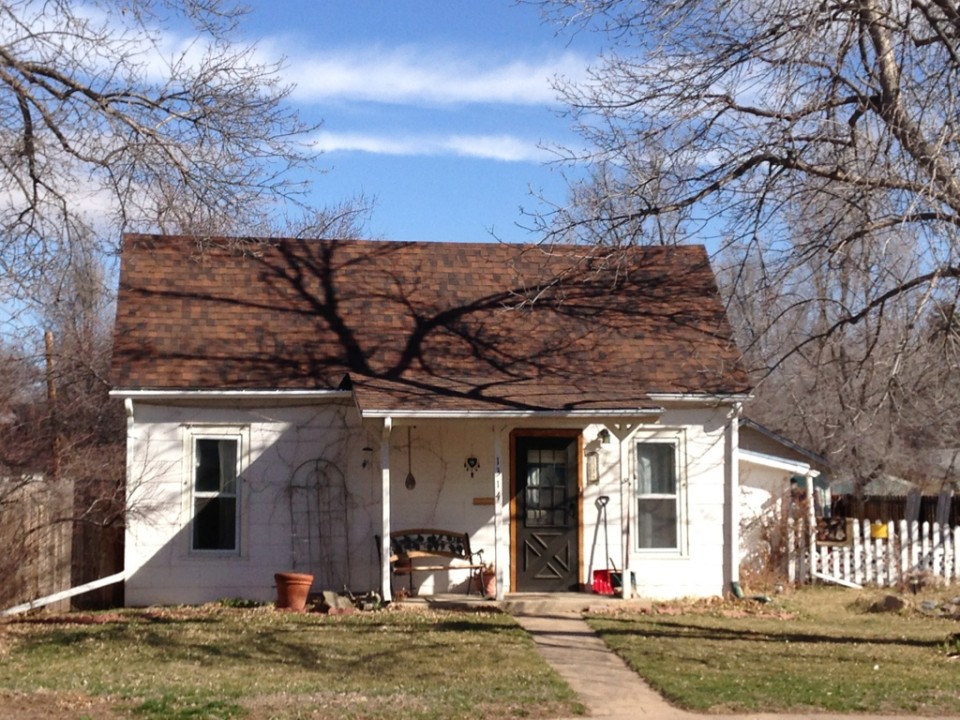 The James and Eva Howe house as it looks today on W. Myrtle.

The last building on the block that’s still around today is rather infamous. In April of 1888, James Howe, in a drunken rage, murdered his wife. The house was located on Walnut, right next to the empty lot where the Elks Building would later be built. So when Eva was running from her husband, her screams could be heard all along Walnut and Linden. The house was moved down the street (to about where the Armadillo restaurant building stands today) and replaced with an auto shop that has since been turned into Illegal Pete’s.

You can read more about James and Eva’s story here.

Moving to the block just to the southeast of this, there are a few buildings on the map, but not a one of them remains today (unless they’ve been moved, like the Howe house was). 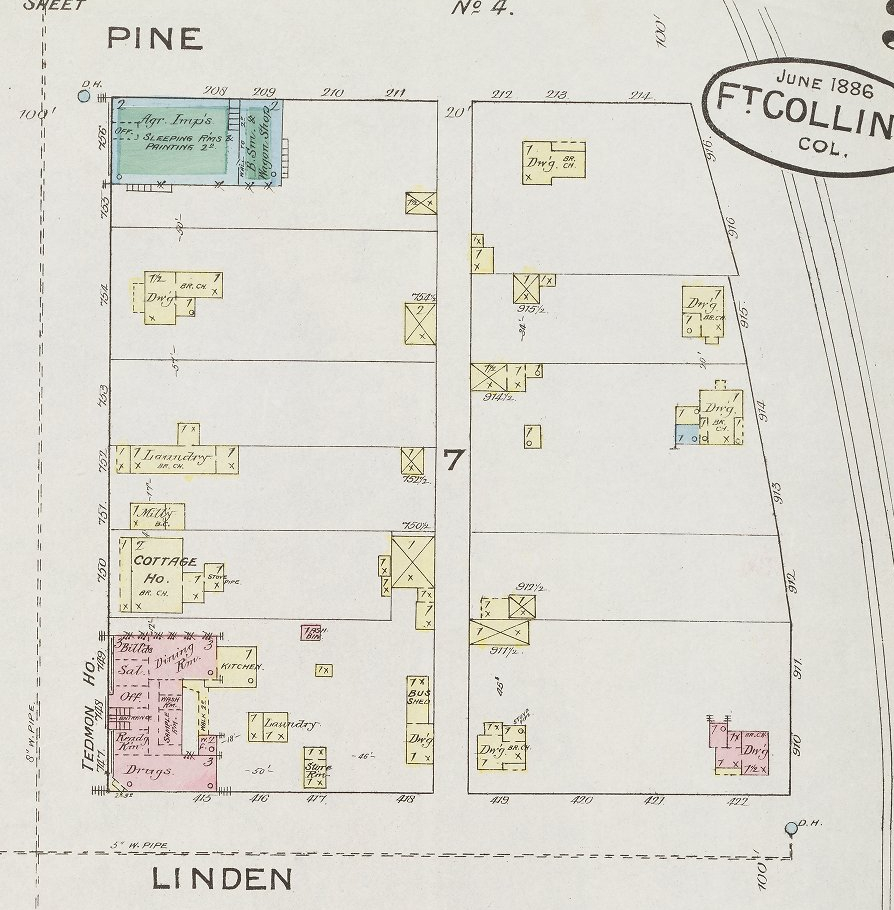 The block bounded by Jefferson, Linden, Willow and Pine has been completely remade since 1886. Where the large pink building is at the corner of Linden and Jefferson, the Tedmon Hotel, is now the Jefferson park that’s probably best known nowadays as being a hangout for the homeless.

All of the buildings along Jefferson were removed in 1910 to make way for the new Colorado & Southern Railway that was brought through. The buildings were auctioned off. Some were moved to new locations. Others, like the hotel, were sold for building materials.

Pine street, northeast of Jefferson, no longer exists along the block. It remains to both the south and north, but the railway blocked Pine Street here. The same happened for Chestnut Street, although the segment of the street northeast of Willow was removed as well. 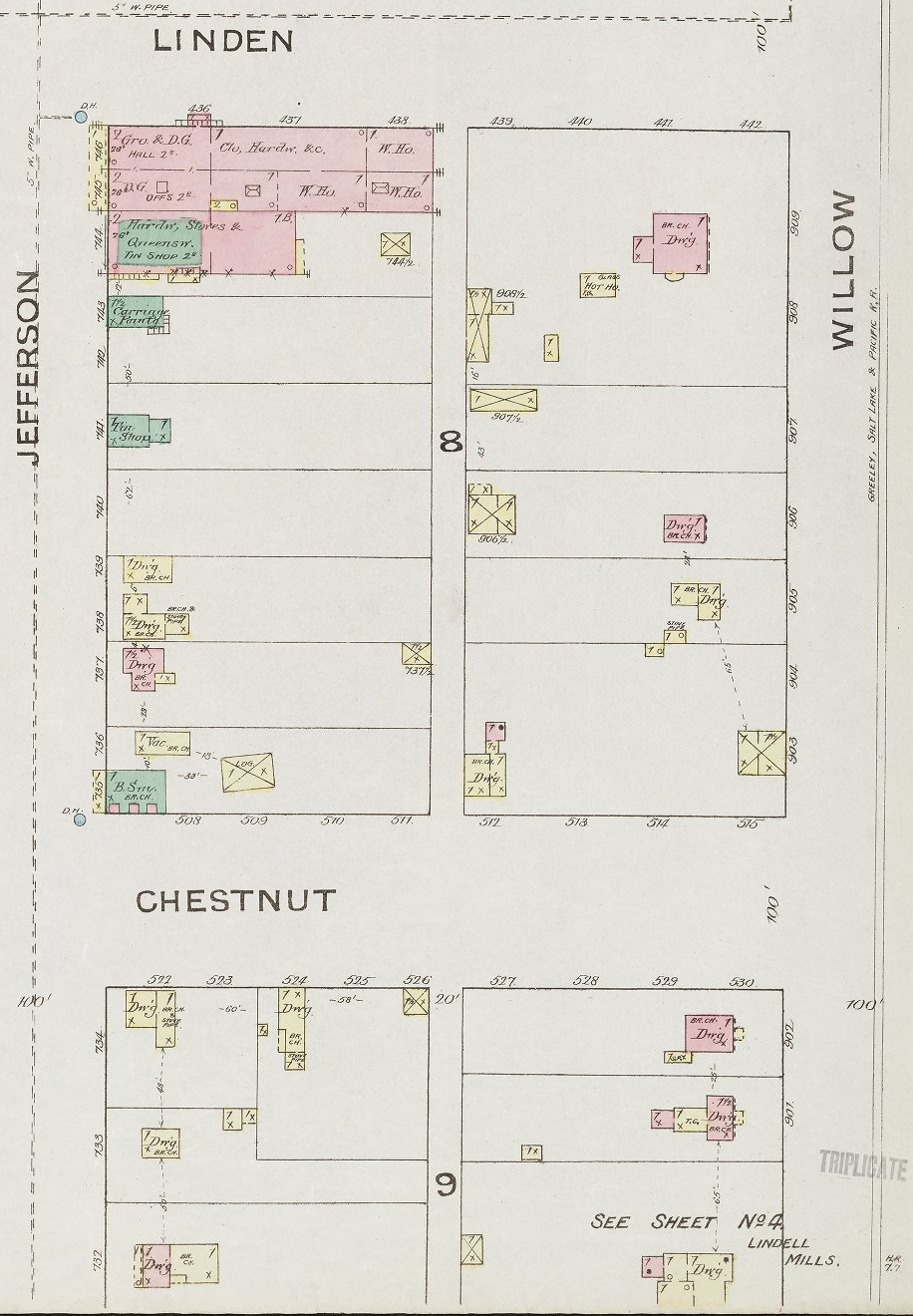 All of the buildings on these blocks were removed as well. After World War II, the number of G.I.’s attending the college skyrocketed and they were housed in quonset huts on campus. When the buildings were no longer needed by the school, several of them were moved to this section of Jefferson street where they still stand today.

Researching this post took a bit more work than the previous map articles because, for whatever reason, the buildings along the southeast side of the 200 block of Linden aren’t very well documented. And some of the documents that I was able to find in the Fort Collins Archive (such as the history of one building written on the back of a restaurant menu) was clearly full of inaccuracies (such as that the founder of the city was Tom Collins… and his brother’s name was Vodka). But I did finally happen across the photo of the Mason’s parade, which helped tremendously.

And I used the Assessor’s Records frequently, although discovering the mis-dating of 214 Linden made me even more wary than usual as I checked out dates.