In 1886, a Sanborn insurance map was drawn up that shows the buildings in Fort Collins at the time. Most of these have been lost to us, but a few remain. See previous pages of the map here: page 1, page 2, page 3a (first part), and page 3b (second part). I’m going to jump right into the last page. 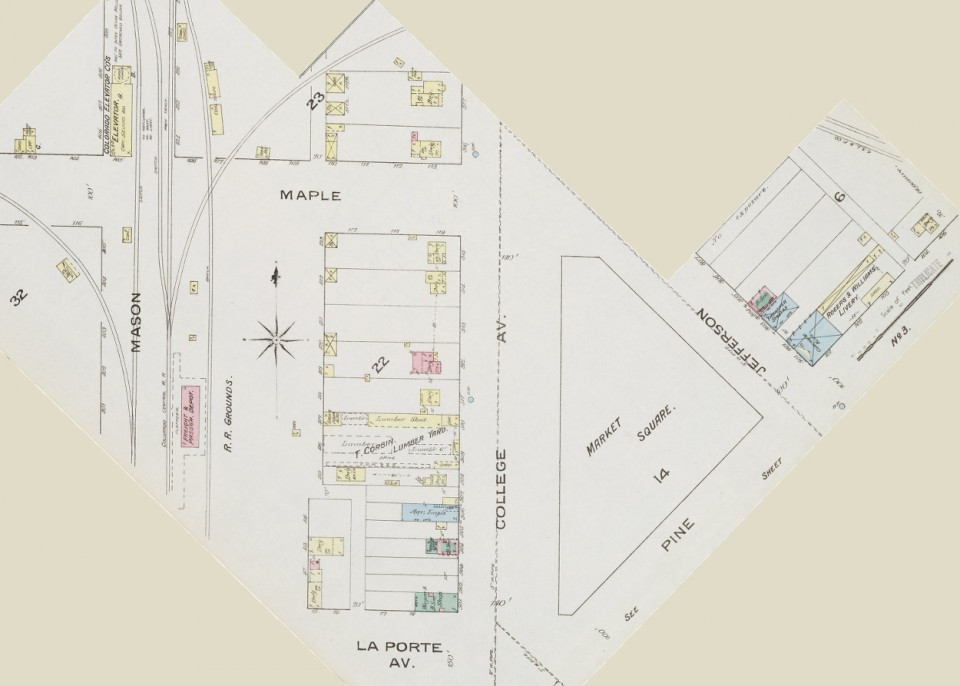 The first bit of page 4 that we’re going to look at was oriented towards the river with College running at a 45 degree angle on the page. I’ve tipped it back to a north-south heading so that it lines up better with how we’re used to looking at the city. Included in this section of the map is College Avenue north of Laporte, the Market Square (which is where Pateros Creek Brewing, Coppermuse Distillery, Compass Cider, EZ Pawn and Life Changes Body Art are located today) and a bit of Jefferson Street.

Everything on the northeast side of Jefferson was removed when the Union Pacific railroad came through in 1910. And where the Rogers & Williams Livery once stood (the larger blue building to the right on the image above) is where one end of the old railway station stands today (housing the Rodizio Grill).

“Dw’g” stands for dwelling, and most of what we see north of Laporte is houses. Yellow indicates a wooden building. Pink stands for brick. There are some other buildings in that area, though. There’s a lumber yard just about in the middle of the block between Maple and Laporte. And south of that we get a few shops including a blacksmiths shop where Beau Jo’s Pizza now stands. 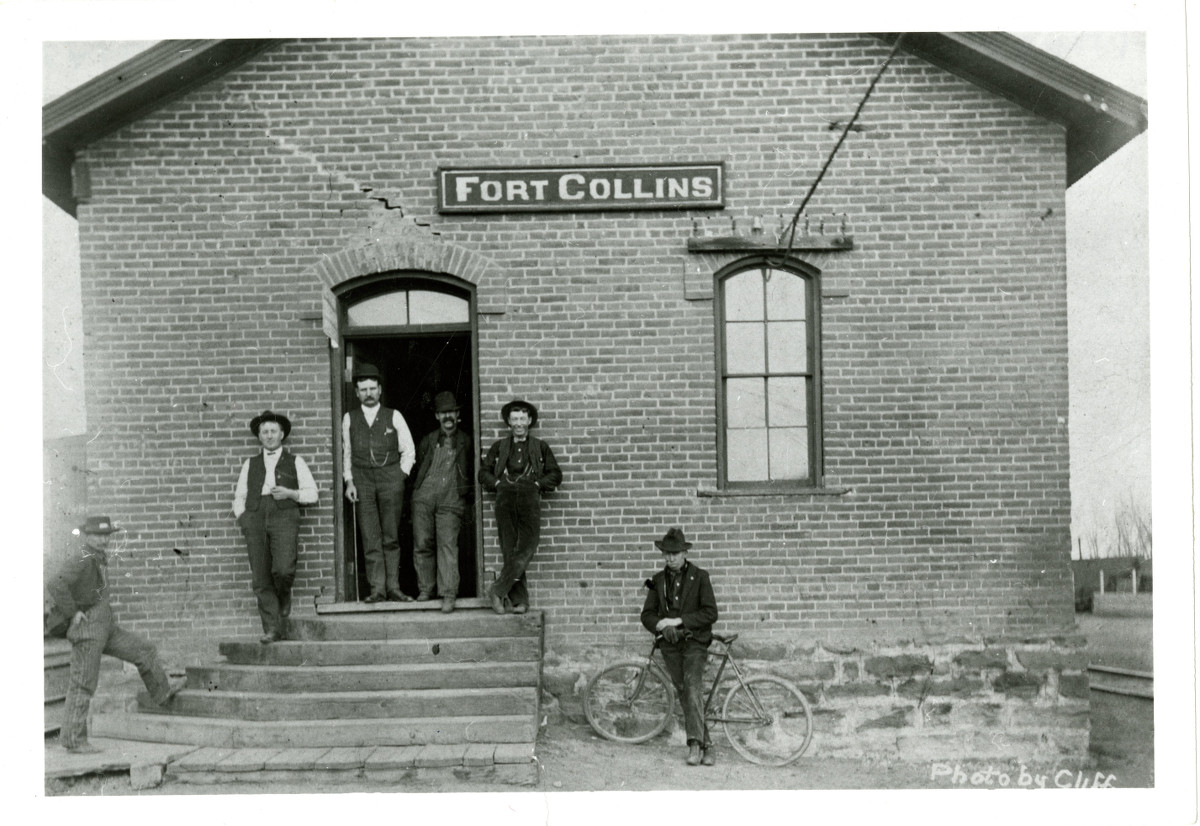 Behind College Avenue was the Colorado & Southern railway depot. It was replaced in 1911 with the depot that we have today.

As we head north on Mason, we see a building out in the street. This would be just to the east of where Penny Flats is today. It was a horse powered grain elevator. There are also smaller buildings around, mostly coal sheds, though a couple held hay and one held oil. 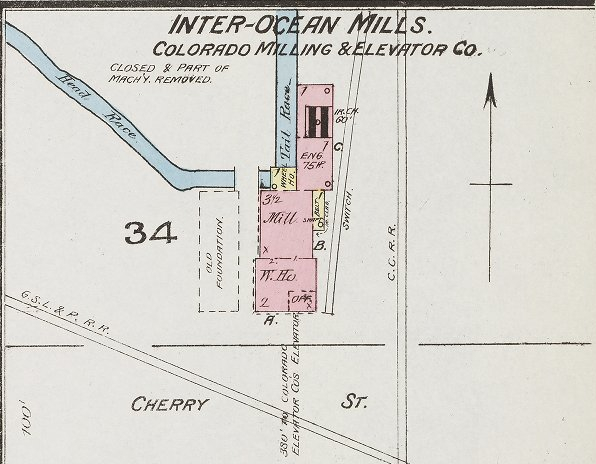 Even further north on Mason stood the Inter-Ocean Mills. Where the old foundation is outlined in the image above is right about where Daz Bog stands today at Mason and Cherry. 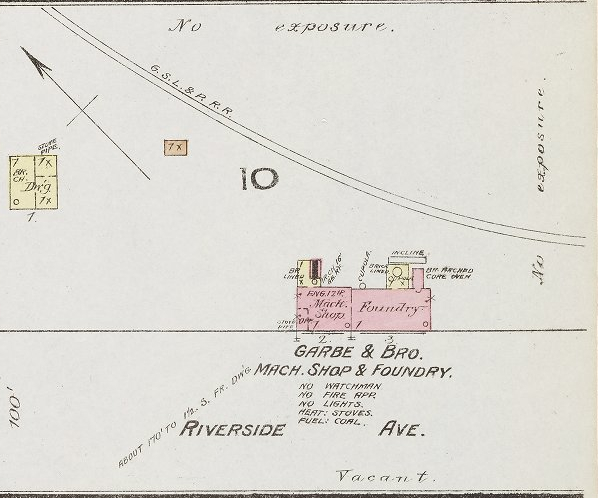 Two of the inset boxes on this page jump over to the other side of town. The image above shows the Garbe & Brothers Machine Shop and Foundry on Riverside Avenue right across from where Whedbee joins Riverside. (In looking back at page 1, I’ve just noticed that the map maker labeled these streets wrong. Peterson was not listed at all and was instead called Whedbee. And Whedbee was called Smith. Apparently it was an oversight that went unnoticed until after the map was signed off on by the local insurance companies.) 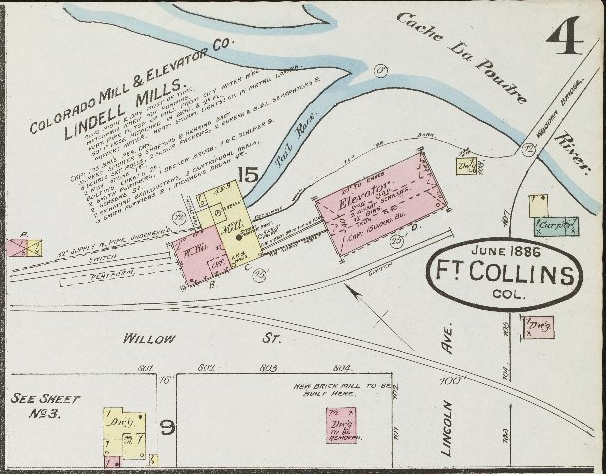 So far, among every part of this page that we’ve looked at, not a single building remains to us today that was shown as having stood in this area in 1886. In this last section, there are several dwellings (Dw’g). All of them are now gone. There is a note next to the building at the northwest corner of Lincoln and Willow that a new mill will be built there, and that building is still with us — the Harmony Mill. But it hadn’t been built yet in 1886.

Of all the buildings shown on page 4 of the 1886 Sanborn map, only one remains with us today. Granted, it’s now covered with several other bits of building that have been glommed onto it, but the original structure is in there. And that’s at Ranchway Feeds (originally Lindell Mills). 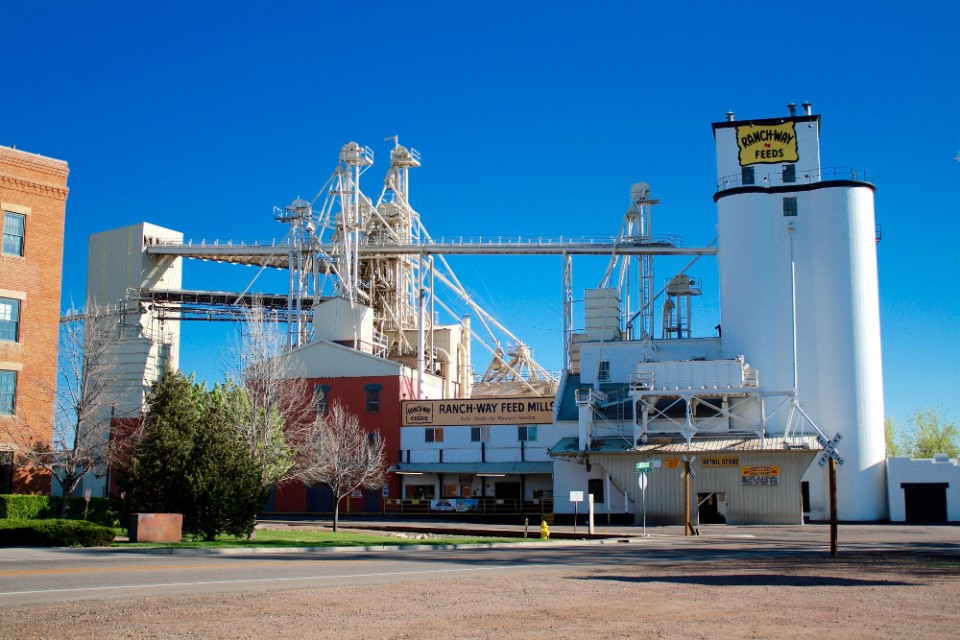 The brick building, mostly hidden by trees in this photo, was around in 1886. 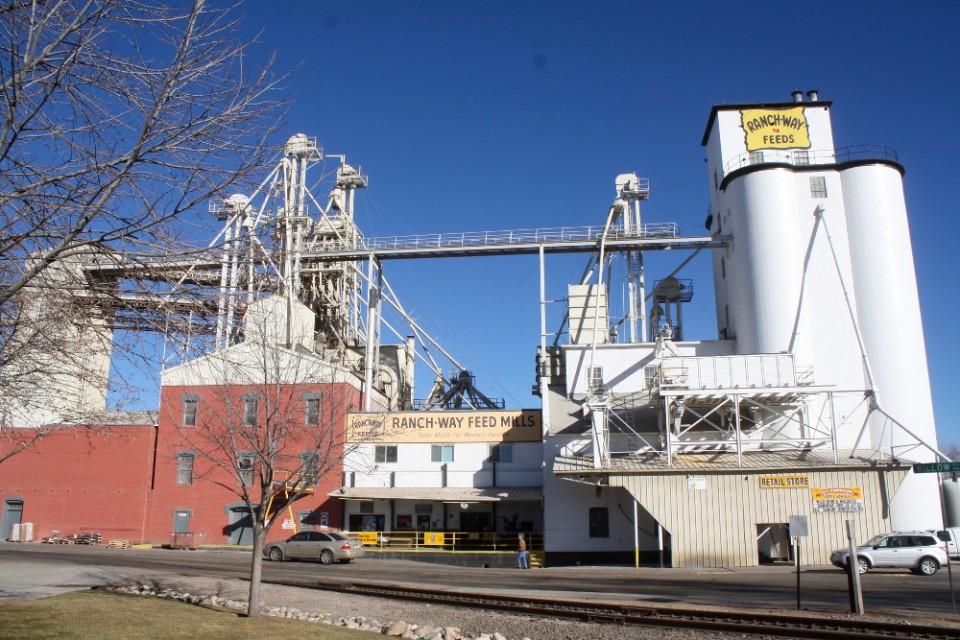 You can see it a little better in the second photo. Ranchway Feeds was originally the Lindell Mill, started by Auntie Stone and Henry Peterson. It was later owned by Joe Mason and Ben Hottel. The old brick building was severely damaged in October of 1895, but was rebuilt. The old rail line that ran in front of the building still remains as well.

It should be noted that there were also some houses that weren’t included in the 1886 Sanborn map because they were outside of the city limits at the time, but today we think of them as being in “Old Town.” One example is 616 W. Oak Street. 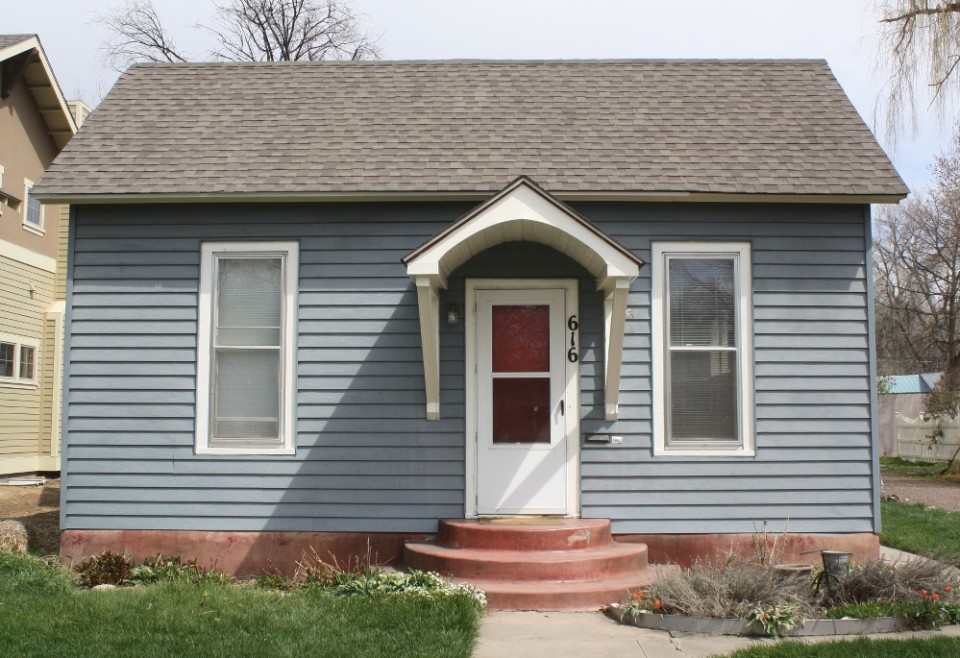 This house is in the Loomis Addition, which wasn’t added on to the city until 1887. So at the time the house was built (1885) it was outside of town. William Bernheim probably built this house and may have lived in it for awhile.